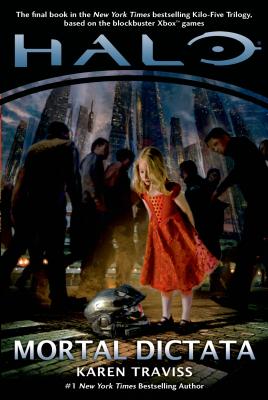 Halo: Mortal Dictata is a New York Times bestseller and the final book in the Kilo-Five Trilogy, based on the blockbuster Xbox games.

Wars end. But hatred, guilt, and devotion can endure beyond the grave.

With the Covenant War over, the Office of Naval Intelligence faces old grievances rising again to threaten Earth. The angry, bitter colonies, still with scores to settle from the insurrection put on hold for thirty years, now want justice -- and so does a man whose life was torn apart by ONI when his daughter was abducted for the SPARTAN-II program. Black ops squad Kilo-Five find their loyalties tested beyond breaking point when the father of their Spartan comrade, still searching for the truth about her disappearance, prepares to glass Earth's cities to get an answer. How far will Kilo-Five go to stop him? And will he be able to live with the truth when he finds it? The painful answer lies with a man long dead, and a conscience that still survives in the most unlikely, undiscovered place.

“Traviss here employs a raw, unadorned style that makes this a real page-turner. But while Dictata is a quick read, it's not quickly forgotten…. Dictata is also Traviss's best Halo novel…” —Paul Semel, Official Xbox Magazine

#1 New York Times best-selling novelist, scriptwriter and comics author Karen Traviss has received critical acclaim for her award-nominated Wess'har series, as well as regularly hitting the bestseller lists with her Halo, Gears of War, and Star Wars work. A former defense correspondent and TV and newspaper journalist, she lives in Wiltshire, England.
Loading...
or
Not Currently Available for Direct Purchase