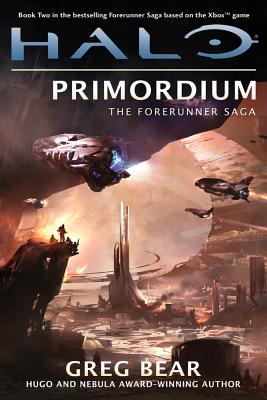 The second in a new series of three HALO novels, Greg Bear's Halo: Primordium dives back into the Forerunner saga.

A long time ago, I was a living, breathing human being. I went mad. I served my enemies. They became my only friends.

Since then, I've traveled back and forth across this galaxy, and out to the spaces between galaxies--a greater reach than any human before me.

You have asked me to tell you about that time. Since you are the last true Reclaimer, I must obey. Are you recording? Good. Because my memory is failing rapidly. I doubt I'll be able to finish the story.

Once, on my birth-world, a world I knew as Erde-Tyrene, and which now is called Earth, my name was Chakas...

In the wake of apparent self-destruction of the Forerunner empire, two humans--Chakas and Riser--are like flotsam washed up on very strange shores indeed.

Captured by the Master Builder, misplaced during a furious battle in space, they now find themselves on an inverted world where horizons rise into the sky, and where humans of all kinds are trapped in a perilous cycle of horror and neglect. For they have become both research animals and strategic pawns in a cosmic game whose madness knows no end--a game of ancient vengeance between the powers who seeded the galaxy with life, and the Forerunners who expect to inherit their sacred Mantle of duty to all living things.

In the company of a young girl and an old man, Chakas begins an epic journey across a lost and damaged Halo in search of a way home, an explanation for the warrior spirits rising up within, and for the Librarian's tampering with human destiny.

This journey will take them into the Palace of Pain, the domain of a powerful and monstrous intelligence who claims to be the Last Precursor, and who now has control of both this Halo and the fate of Forerunners and Humans alike.

Called the Captive by Forerunners, and the Primordial by ancient human warriors, this intelligence has taken charge of, and retasked, the Master Builder's cruel researches into the Flood--which it may have itself unleashed on the galaxy more than ten thousand years before.

Greg Bear is the author of more than thirty books of science fiction and fantasy, including The Forge of God, Eon, Slant, and the Nebula Award winning novel Moving Mars.  He has also written gaming tie-ins such as Halo: Cryptum, and Hull Zero Three. Awarded two Hugos and five Nebulas for his fiction, he is one of only two authors to win a Nebula in every category. He has been called the "Best working writer of hard science fiction" by The Ultimate Encyclopedia of Science Fiction. His stories have been collected into an omnibus volume by Tor Books, The Best of Greg Bear. Bear has served on political and scientific action committees and has advised Microsoft Corporation, the U.S. Army, the CIA, Sandia National Laboratories, Callison Architecture, Inc., and other groups and agencies. He is married to Astrid Anderson Bear and is the father of Erik and Alexandra.
or
Not Currently Available for Direct Purchase
Copyright © 2020 American Booksellers Association