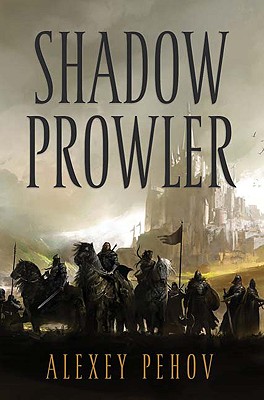 After centuries of calm, the Nameless One is stirring.

An army is gathering; thousands of giants, ogres, and other creatures are joining forces from all across the Desolate Lands, united, for the first time in history, under one, black banner. By the spring, or perhaps sooner, the Nameless One and his forces will be at the walls of the great city of Avendoom.

Unless Shadow Harold, master thief, can find some way to stop them.

Epic fantasy at its best, Shadow Prowler is the first in a trilogy that follows Shadow Harold on his quest for a magic Horn that will restore peace to the Kingdom of Siala.  Harold will be accompanied on his quest by an Elfin princess, Miralissa, her elfin escort, and ten Wild Hearts, the most experienced and dangerous fighters in their world…and by the king’s court jester (who may be more than he seems…or less).

Reminiscent of Moorcock's Elric series, Shadow Prowler is the first work to be published in English by the bestselling Russian fantasy author Alexey Pehov.  The book was translated by Andrew Bromfield, best known for his work on the highly successful Night Watch series.

“An exciting take on classical themes as a professional thief finds himself reluctantly cast into the role of a hero to save his homeland from destruction. The story is engrossing, the characters intriguing and dynamic; there are mysteries galore and the very real sense as we set out that far creepier things are waiting down the road. In short, a book I didn’t want to put down and want to see what comes next.”
--Chris Claremont, bestselling writer of the X-Men and Wolverine"Toothy, gritty, and relentless. Alexey Pehov sneaks up on you and fascinates with the wry voice of a young Moorcock. Clear space on your shelf--you'll want the whole series."
--E.E. Knight, bestselling author of the Vampire Earth series
"Shadow Prowler is a fresh, exuberant take on territory that will be familiar to all fans of classic high fantasy. Alexey Pehov introduces a cast of charming, quirky, unsavory, even loathesome characters in a fast-paced, entertaining adventure."
--Kevin J. Anderson, co-author of the bestselling Dune books

Alexey Pehov is the award-winning author of The Chronicles of Siala, a bestselling series in his native Russia. His novel "Mockingbird" was named Book of Year in 2009 by Russia's largest fantasy magazine, "World of Fantasy.

"Andrew Bromfield is an editor and translator of Russian works. He is a founding editor of the Russian literature journal "Glas," and has translated into English Sergei Lukyanenko's Night Watch series, among other works.