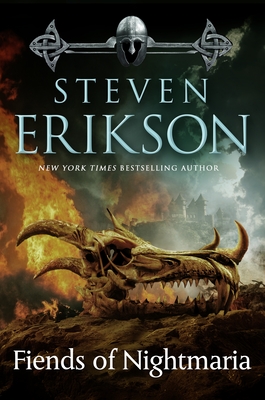 The Fiends of Nightmaria (Malazan Book of the Fallen)

The Fiends of Nightmaria is a new novella from New York Times bestselling author Steven Erikson, set in the world of the Malazan Book of the Fallen.

The king is dead, long live King Bauchelain the First, crowned by the Grand Bishop Korbal Broach. Both are, of course, ably assisted in the running of the Kingdom of Farrog by their slowly unravelling servant, Emancipor Reese. However, tensions are mounting between Farrog and the neighboring country of Nightmaria, the mysterious home of the Fiends. Their ambassador, Ophal D Neeth Flatroq, seeks an audience with King Bauchelain, who has thus far rebuffed his overtures. But the necromancer has some other things on his plate.

To quell potential rebellion nearly all the artists, poets, and bards in the city have been put to death. A few survivors languish in the dungeons, bemoaning their fates. Well, just moaning in general really...and maybe plotting escape and revenge.


Praise For The Fiends of Nightmaria (Malazan Book of the Fallen)…

“A fast-paced, morbidly humorous adventure. Series fans will find much to love in this jam-packed, tongue-in-cheek installment.” —Publishers Weekly

“This masterwork of imagination may be the high-water mark of epic fantasy.” —Glen Cook, bestselling author of The Black Company