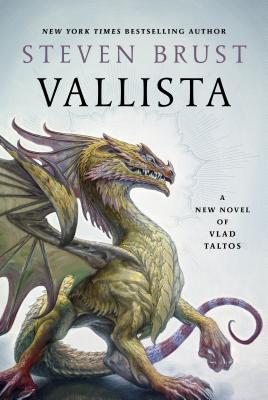 A Novel of Vlad Taltos

Full of swordplay, peril, and swashbuckling flair, Steven Brust's Vallista is a treat for longtime fans of this popular fantasy series, a deep dive into the mysteries of Dragaera and all within it.

Vlad Taltos is an Easterner—an underprivileged human in an Empire of tall, powerful, long-lived Dragaerans. He made a career for himself in House Jhereg, the Dragaeran clan in charge of the Empire’s organized crime. But the day came when the Jhereg wanted Vlad dead, and he’s been on the run ever since. He has plenty of friends among the Dragaeran highborn, including an undead wizard and a god or two. But as long as the Jhereg have a price on his head, Vlad’s life is…messy.

Meanwhile, for years, Vlad’s path has been repeatedly crossed by Devera, a small Dragaeran girl of indeterminate powers who turns up at the oddest moments in his life.

Now Devera has appeared again—to lead Vlad into a mysterious, seemingly empty manor overlooking the Great Sea. Inside this structure are corridors that double back on themselves, rooms that look out over other worlds, and—just maybe—answers to some of Vlad’s long-asked questions about his world and his place in it. If only Devera can be persuaded to stop disappearing in the middle of his conversations with her…

Praise For Vallista: A Novel of Vlad Taltos…