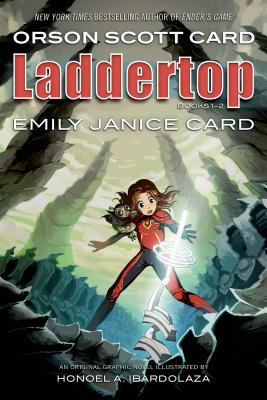 Out of deep space, a mysterious alien race known as "The Givers" came to Earth. They gave the human race the greatest technology ever seen—four giant towers known as Ladders that rose 36,000 miles into space. Each tower culminated in a space station that harnessed the energy of the Sun to power the entire planet. As suddenly as the Givers arrived, they vanished, leaving the human race with one solemn instruction: maintain and preserve the Ladders at all costs. Due to the unique alien construction of the Laddertop space stations, however, only a skilled crew of children could perform the maintenance necessary to keep the stations running.

Twenty-five years later, back on Earth, competition is fierce to enter Laddertop Academy. Robbi and Azure, two eleven-year-old girls who are best friends, are among those vying for a spot at the prestigious academy. While one is rejected, the other takes off into space for the adventure of a lifetime. Yet soon, their destinies will collide, as they must decipher an alien message and solve an ancient mystery that could either save the Earth from invasion...or trigger its imminent destruction.

“A high-octane outer space adventure… The main characters in this volume are largely female, strong and intelligent, a wonderful departure from male-dominated extraterrestrial offerings. Ibardolaza's muscular art blends manga and Western aesthetics. An intriguing beginning; readers will clamor for the follow-up.” —Kirkus Reviews on Laddertop Volume 1

“It's a fun read, aided by the dynamic artwork of illustrator Honoel A. Ibardolaza. And the cliff-hanger ending will leave readers waiting anxiously for the next installment.” —Deseret News on Laddertop Volume 1

Emily Janice Card has read a number of audiobooks, including Ben Bova's The Aftermath, Orson Scott Card's Ender in Exile, Lisa Gardner's The Neighbor, and several titles by Kimberly Willis Holt. Card  is an actor, singer, and writer from North Carolina.  On screen, she's appeared in The Delivery.  Her stage work includes The Importance of Being Earnest, Bye Bye Birdie, The Fantasticks, and Once Upon a Mattress.  She also adapted and starred in the play A Sepulcher of Songs, based on a short story by her father, Orson Scott Card.

HONOEL A. IBARDOLAZA is an award-winning illustrator of children’s books and manga, including The Greediest of Rajahs and the Whitest of Clouds. He lives in the Philippines.
Loading...
or support indie stores by buying on