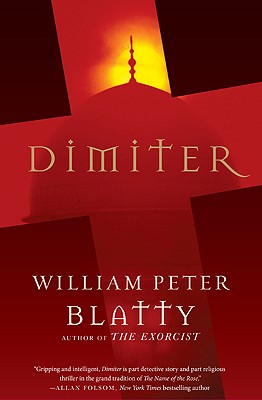 William Peter Blatty has thrilled generations of readers with his iconic mega-bestseller The Exorcist. Now Blatty gives us Dimiter, a riveting story of murder, revenge, and suspense. Laced with themes of faith and love, sin and forgiveness, vengeance and compassion, it is a novel in the grand tradition of Morris West’s The Devil’s Advocate and the Catholic novels of Graham Greene.

Dimiter opens in the world’s most oppressive and isolated totalitarian state: Albania in the 1970s. A prisoner suspected of being an enemy agent is held by state security. An unsettling presence, though subjected to unimaginable torture he maintains an eerie silence. He escapes---and on the way to freedom, completes a mysterious mission. The prisoner is Dimiter, the American “agent from Hell.”

Told with unrelenting pace, Dimiter’s compelling, page-turning narrative is haunted by the search for faith and the truths of the human condition. Dimiter is William Peter Blatty's first full novel since the 1983 publication of Legion.

William Peter Blatty, the writer of numerous novels and screenplays, is best known for his mega-bestselling novel "The Exorcist," deemed by the "New York Times Book Review" to be "as superior to most books of its kind as an Einstein equation is to an accountant's column of figures." An Academy Award winner for his screenplay for "The Exorcist," Blatty is not only the author of one of the most terrifying novels ever written, but, paradoxically, also cowrote the screenplay for the hilarious Inspector Clouseau film, "A Shot in the Dark. New York Times" reviewers of his early comic novels noted, "Nobody can write funnier lines than William Peter Blatty," describing him as "a gifted virtuoso who writes like S. J. Perelman." Blatty lives with his wife and a son in Maryland.

"Dimiter is an intelligent, tightly wound, suspenseful novel. One can only hope Blatty will publish another sometime soon.”—USA Today