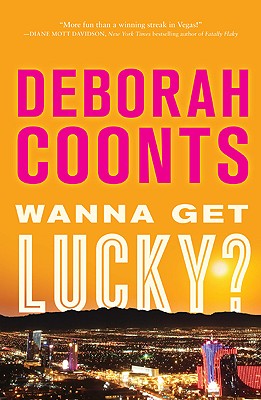 “Witty, unrelenting, and tenacious, Lucky O'Toole runs the Babylon Casino in LasVegas. When a suspected murder kicks off a weekend filled with a sex industry convention, a swingers' retreat, and an adult film industry banquet, Lucky must add investigator to her repertoire. Wrangling the partygoers, pornographers, and murderers is enough to drive Lucky over the edge, but she holds on with sarcasm, passion, and just a smidge of romance.”
— Megan Fecko, Joseph-Beth Booksellers, Lyndhurst, OH
View the List

A young woman plunges from a Las Vegas sightseeing helicopter, landing in the Pirate's lagoon in front of the Treasure Island Hotel in the middle of the 8:30 Pirate Show. Almost everyone writes her off as another Vegas victim.

But Lucky O'Toole smells a rat. She's head of Customer Relations at The Babylon, the newest, most opulent mega-casino and resort on the Strip, so she's got a lot on her plate: the Adult Film industry's annual awards banquet, a spouse-swapping convention, sex toy purveyors preying on the pocket-protector crowd attending ElectroniCon . Still, Lucky can't resist turning over a few stones.

When a former flame is one of the snakes she uncovers, Lucky's certain she's no longer dealing with an anonymous Sin City suicide. To top it all off, Lucky's best friend Teddie Las Vegas' finest female impersonator presses to take their relationship to the next level. Leave it to Lucky to attract a man who looks better in a dress than she does.

Lucky must manage the Babylon's onslaught of outrageous festivities, solve a murder, and struggle to keep her life and libido from spinning out of control not to mention keep her balance in six inch heels.


Praise For Wanna Get Lucky?…

"Wanna Get Lucky? is a winner on every level.  A first-class murder mystery coupled with a touching and unexpected love story.  Against a flawlessly-rendered Las Vegas backdrop, Lucky's story is funny, fast-paced, exuberant and brilliantly realized."--Susan Wiggs, #1 New York Times bestselling author of Just Breathe “Deborah Coonts hits it out of the park with her debut novel, Wanna Get Lucky?  Peppered with delightfully witty characters and only-in-Vegas hijinks, it’s definitely on my This Year’s Best Read list.”
--Stephen J. Cannell, New York Times bestselling author of the Shane Scully novels "Paints a dead-on portrait of Las Vegas that is somehow dark, outrageous, and hilarious at the same time.  Lucky O’Toole is wise, witty, and brimming with cheery cynicism. Wanna Get Lucky? goes down faster than an ice-cold Bombay martini—very dry, of course, and with a twist."
--Douglas Preston, New York Times bestselling author of Blasphemy

DEBORAH COONTS's mother tells her she was born in Texas a very long time ago, though she's not totally sure--her mother can't be trusted. But she was definitely raised in Texas on barbeque, Mexican food and beer. She currently resides in Las Vegas, where family and friends tell her she can't get into too much trouble. Silly people. Coonts has built her own business, practiced law, flown airplanes, written a humor column for a national magazine, and survived a teenager.
Loading...
or
Not Currently Available for Direct Purchase