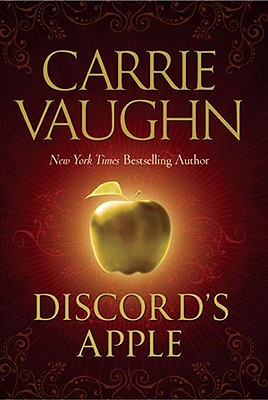 When Evie Walker goes home to spend time with her dying father, she discovers that his creaky old house in Hope’s Fort, Colorado, is not the only legacy she stands to inherit. Hidden behind the old basement door is a secret and magical storeroom, a place where wondrous treasures from myth and legend are kept safe until they are needed again. The magic of the storeroom prevents access to any who are not intended to use the items. But just because it has never been done does not mean it cannot be done.

And there are certainly those who will give anything to find a way in.

Evie must guard the storeroom against ancient and malicious forces, protecting the past and the future even as the present unravels around them. Old heroes and notorious villains alike will rise to fight on her side or to undermine her most desperate gambits. At stake is the fate of the world, and the prevention of nothing less than the apocalypse. In the same month, along with this all-new hardcover, Tor will publish a new novel in Carrie Vaughn’s popular, New York Times bestselling urban fantasy series featuring werewolf talk radio host, Kitty Norville. Kitty Goes to War will be the eighth book in this successful mass market series.


“Fun, fast-paced adventure for fans of supernatural mysteries.”
—Locus on Kitty and the Midnight Hour

“Enough excitement, astonishment, pathos, and victory to satisfy any reader.”
—Charlaine Harris on Kitty and the Midnight Hour

"Carrie Vaughn weaves a gorgeous tapestry of the human condition in a post apocalyptic world filled with mystery, magic, and immortals.  Her world building is masterful!"
--L.A. Banks, New York Times bestselling author of The Thirteenth

"Myths, magic and mayhem abound in Carrie Vaughn’s Discord’s Apple.  Once you take a bite, you won’t be able to put it down."
--Lori Handeland, New York Times Bestselling author of Apocalypse Happens

“With Discord's Apple Carrie Vaughn has created an engaging modern addition to the world of Greek myth. Vaughn has a powerful gift for marrying the mythic and the mundane to produce the extraordinary. . . .   The result is a voyage of discovery that will make the reader very glad they didn't miss the boat.”
--Kelly McCullough, author of WebMage and MythOS

Carrie Vaughn is the "New York Times" bestselling author of the Kitty Norville books, including "Kitty's Big Trouble," "Kitty Goes to War," and "Kitty and the Midnight Hour." She is also the author of the standalone novel "After the Golden Age," and the young adult books "Voice of Dragons" and "Steel." Vaughn had the nomadic childhood of the typical Air Force brat, with stops across the country from California to Florida. She earned her B.A. from Occidental College in Los Angeles, and a master's in English from the University of Colorado at Boulder. She has worked as a Renaissance Festival counter wench, a theater usher, an editor, a buyer at an independent bookstore, and an administrative assistant. She lives in Boulder, Colorado.
Loading...
or
Not Currently Available for Direct Purchase