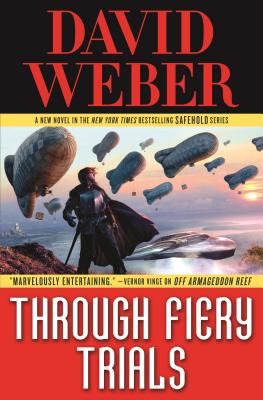 With new alliances forged and old regimes fractured, Merlin—the cybernetic avatar of Earth's last survivor and immortal beacon to humanity—and the colonies of Safehold have many adventures ahead in Through Fiery Trials, the continuation of David Weber's New York Times bestselling military science fiction series

David Weber is a science fiction phenomenon. His popular Honor Harrington and Honorverse novels—including Mission of Honor, At All Costs, and Torch of Freedom—are New York Times bestsellers and can't come out fast enough for his devoted readers. He is also the author of the Safehold series, including Off Armageddon Reef, By Schism Rent Asunder, By Heresies Distressed and A Mighty Fortress. His other top-selling science fiction novels include Out of the Dark, the Dahak books and the Multiverse books, written with Linda Evans. He has also created an epic SF adventure series in collaboration with John Ringo, including We Few. His novels have regularly been Main Selections of the Science Fiction Book Club. Weber has a bachelor’s degree from Warren Wilson College, and attended graduate school in history at Appalachian State University. He lives in South Carolina.
Loading...
or
Not Currently Available for Direct Purchase