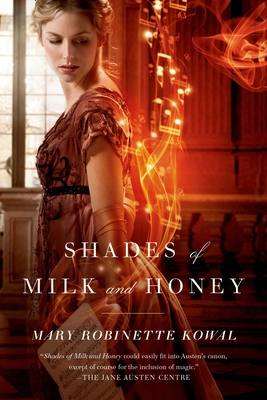 Shades of Milk and Honey is an intimate portrait of Jane Ellsworth, a woman ahead of her time in a world where the manipulation of glamour is considered an essential skill for a lady of quality. But despite the prevalence of magic in everyday life, other aspects of Dorchester's society are not that different: Jane and her sister Melody's lives still revolve around vying for the attentions of eligible men.

Jane resists this fate, and rightly so: while her skill with glamour is remarkable, it is her sister who is fair of face, and therefore wins the lion's share of the attention. At the ripe old age of twenty-eight, Jane has resigned herself to being invisible forever. But when her family's honor is threatened, she finds that she must push her skills to the limit in order to set things right--and, in the process, accidentally wanders into a love story of her own.

This debut novel from an award-winning talent scratches a literary itch you never knew you had. Like wandering onto a secret picnic attended by Pride and Prejudice and Jonathan Strange & Mr Norrell, Shades of Milk and Honey is precisely the sort of tale we would expect from Jane Austen...if only she had been a fantasy writer.


Praise For Shades of Milk and Honey (Glamourist Histories #1)…

“If Jane Austen had written a fantasy novel, Shades of Milk and Honey would have been the result. Written with painstaking attention to detail, Kowal's prose is serenely evocative of the time period, and the fantastic elements are a seamless fit. The characterization is extremely well done and Jane is a sympathetic, strong and intelligent heroine whose devotion to her family trumps nearly every other concern. Give this one a try!” —RT Book Reviews, 4 ½ stars, Top Pick!

“A beautiful, lyrical, tightly-woven meld of Jane Austen, Jane Eyre, and Beauty and the Beast--I couldn't put it down!” —Lilith Saintcrow

“Simply enchanting, and another great advance in an already impressive literary career. You're going to love this.” —John Scalzi

“Shades of Milk and Honey is a lovely, smart, strange novel with everything on earth (and elsewhere) to recommend it. Smoothly crafted with a flair for romance and mystery, this story is one part meticulous manners and one part wild magic -- composing a whole that's utterly irresistible.” —Cherie Priest

“Kowal's first novel is a beautifully told story of being true: true to love, true to family, and true to art, even when it seems that one of them must give. It's a marvelous and promising debut, and hints at more wonders to come.” —Cory Doctorow

Mary Robinette Kowal is the author of the Hugo, Nebula, and Locus Award-winning alternate history novel The Calculating Stars, the first book in the Lady Astronaut series which continues with The Relentless Moon. She is also the author of The Glamourist Histories series and Ghost Talkers and has received the Astounding Award for Best New Writer, four Hugo Awards, the Nebula and Locus Awards. Her stories appear in Asimov’s, Uncanny, and several Year’s Best anthologies. Mary Robinette has also worked as a professional puppeteer, is a member of the Award-winning podcast Writing Excuses, and performs as a voice actor (SAG/AFTRA), recording fiction for authors including Seanan McGuire, Cory Doctorow, and Neal Stephenson. She lives in Nashville with her husband Rob and over a dozen manual typewriters.
Loading...
or support indie stores by buying on