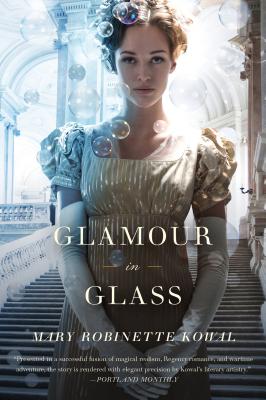 Mary Robinette Kowal stunned readers with her charming first novel Shades of Milk and Honey, a loving tribute to the works of Jane Austen in a world where magic is an everyday occurrence.

This magic comes in the form of glamour, which allows talented users to form practically any illusion they can imagine. Shades debuted to great acclaim and left readers eagerly awaiting its sequel.

Glamour in Glass follows the lives of beloved main characters Jane and Vincent, with a much deeper vein of drama and intrigue.

Left with no outward salvation, Jane must persevere over her trying personal circumstances and use her glamour to rescue her husband from prison…and hopefully prevent her newly built marriage from getting stranded on the shoals of another country's war.

“The setting and the intricate techniques of glamour manipulation continue to intrigue, and the thoughtful portrayal of the difficulties of Jane and Vincent's affectionately nontraditional partnership is thoroughly engaging.” —Publishers Weekly

“This is a wonderful book. Kowal has taken such care grounding her story in the time and place in which it's set that the addition of magic is truly seamless. Jane is a superb heroine.” —RT Book Reviews

“Prepare to settle in and snuggle up in your comfiest chair; once you start reading, you won't want to stop.” —Library Journal

“Will appeal to fans of Jane Austen, Jane Yolen, Patricia Wrede, Susanna Clarke, and even Jasper Fforde.” —Library Journal on Shades of Milk and Honey

“Kowal sets her own mark on this kind of comedy of manners and creates a low-key and witty debut novel, one that succeeds through understated humor and sprightly prose, rather than through absurd juxtapositions of the historical and the supernatural.” —San Francisco Chronicle on Shades of Milk and Honey

“Shades of Milk and Honey could easily fit into Austen's canon, except of course for the inclusion of magic. Kowal has captured both the style and content of an Austen novel, adding her own speculative fiction twist...hits all the high points of Austen's dialogue and plotting while still having its own identity.” —The Jane Austen Center on Shades of Milk and Honey

“If Jane Austen had written a fantasy novel, [this] would have been the result. Written with painstaking attention to detail, Kowal's prose is serenely evocative of the time period, and the fantastic elements are a seamless fit. The characterization is extremely well done and Jane is a sympathetic, strong and intelligent heroine whose devotion to her family trumps nearly every other concern.” —RT Book Reviews, 4 ½ stars, Top Pick!, Seal of Excellence winner on Shades of Milk and Honey

“A lovely, smart, strange novel with everything on earth (and elsewhere) to recommend it. Smoothly crafted with a flair for romance and mystery, this story is one part meticulous manners and one part wild magic--composing a whole that's utterly irresistible.” —Cherie Priest on Shades of Milk and Honey

“A beautiful, lyrical, tightly woven meld of Jane Austen, Jane Eyre, and Beauty and the Beast--I couldn't put it down!” —Lilith Saintcrow on Shades of Milk and Honey

“Simply enchanting, and another great advance in an already impressive literary career. You're going to love this.” —John Scalzi on Shades of Milk and Honey

Mary Robinette Kowal is the author of the Hugo, Nebula, and Locus award winning alternate history novel The Calculating Stars, the first book in the Lady Astronaut series which continues with The Relentless Moon. She is also the author of The Glamourist Histories series and Ghost Talkers and has received the Astounding Award for Best New Writer, four Hugo awards, the Nebula and Locus awards. Her stories appear in Asimov’s, Uncanny, and several Year’s Best anthologies. Mary Robinette has also worked as a professional puppeteer, is a member of the award-winning podcast Writing Excuses, and performs as a voice actor (SAG/AFTRA) recording fiction for authors including Seanan McGuire, Cory Doctorow, and Neal Stephenson. She lives in Nashville with her husband Rob and over a dozen manual typewriters.
Loading...
or support indie stores by buying on