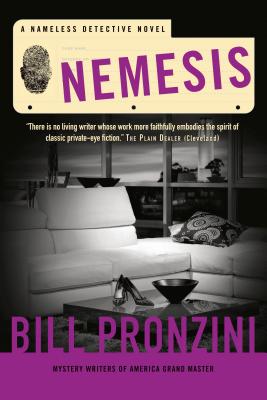 Young, newly rich Verity Daniels claims to be receiving threatening demands for money from a mysterious caller. When Jake Runyon agrees to investigate, it seems a relatively simple matter to expose the extortionist by setting a trap for him.

The case, however, is nowhere near as clear-cut as it first appears.

And Verity Daniels is nowhere near the helpless victim she pretends to be.
A series of surprise revelations culminates in Runyon being falsely accused of a crime that never happened, and he and his employers then become the targets of a vicious legal vendetta. A sudden act of violence turns the case upside down, leading to a much more serious charge against Jake.
With the help of partner Tamara Corbin, Nameless (known as Bill to his associates) puts aside the difficult personal issue that has kept him sidelined at home and works to clear both Runyon's and the agency's good names. The task requires untangling Verity Daniels's bizarre past and present relationships, and before Bill succeeds, he must overcome a deadly threat to his own safety.
"Nemesis "continues author Bill Pronzini's acclaimed Nameless Detective Series.


“Can doing first-rate work as consistently as Pronzini really be as effortless as he makes it seem?”
—Kirkus Reviews, starred review

“The Nameless series continues to be a wonder of great plotting, long-term character development, and insight into the chilling banality of evil.”
—Booklist, starred review

“Pronzini is a pro at PI fiction: he never cheats on the reader, respecting the conventions of the hard-boiled detective stories and puzzle mysteries he employs so well.”
—Library Journal

BILL PRONZINI has been nominated for, or won, every prize offered to crime fiction writers, including the 2008 Grand Master Award from the Mystery Writers of America. He lives and writes in California, with his wife, the crime novelist Marcia Muller.
Loading...
or
Not Currently Available for Direct Purchase