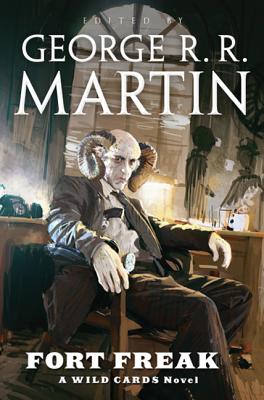 Now in development for TV: Rights to develop Wild Cards for TV have been acquired by Universal Cable Productions, the team that brought you The Magicians and Mr. Robot, with the co-editor of Wild Cards, Melinda Snodgrass as executive producer.

In 1946, an alien virus that rewrites human DNA was accidentally unleashed in the skies over New York City. It killed ninety percent of those it infected. Nine percent survived, mutated into tragically deformed creatures. And one percent gained superpowers. The Wild Cards shared-universe series, created and edited by New York Times #1 bestseller George R. R. Martin (called "the American Tolkien" by Time), is the tale of the history of the world since then and of the heroes among the one percent.

Now, in the latest Wild Cards mosaic novel, we get to know the hardbitten world of Manhattan's Fifth Precinct or "Fort Freak," as cops and malefactors alike call the cop-shop where every other desk sergeant, detective, and patrol officer is more than human.

Featuring original work by writers such as Cherie Priest, author of the bestselling Boneshaker; Paul Cornell, Hugo nominated comic book and Doctor Who writer; David Anthony Durham, winner of 2009's John W. Campbell Award for Best New Writer; and many others, Fort Freak is one of the strongest offerings yet in the ongoing Wild Cards project.

“Delicious…Everything I’d hoped for in a new Wild Cards book. The character interactions and plot twists have exactly the complexity, surprise, and unsentimental realism I’d expect out of a George R. R. Martin project.” —Austin Grossman, author of Soon I Will Be Invincible on Inside Straight

George R.R. Martin is the author of the acclaimed, internationally bestselling fantasy series A Song of Ice and Fire, adapted into the hit HBO series Game of Thrones. He is also the editor and contributor to the Wild Cards series, including the novels Suicide Kings and Fort Freak, among other bestsellers. He has won multiple science fiction and fantasy awards, including four Hugos, two Nebulas, six Locus Awards, the Bram Stoker, the World Fantasy Award, the Daedelus, the Balrog, and the Daikon (the Japanese Hugo). Martin has been writing ever since he was a child, when he sold monster stories to neighborhood children for pennies, and then in high school he wrote fiction for comic fanzines. His first professional sale was to Galaxy magazine, when he was 21. He has been a full-time writer since 1979. Martin has bachelor's and master's degrees in journalism from Northwestern University. He lives in Santa Fe, New Mexico.
Loading...
or
Not Currently Available for Direct Purchase