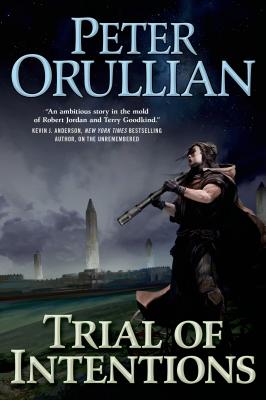 Trial of Intentions (Vault of Heaven #2)

The gods who created this world have abandoned it. In their mercy, however, they chained the rogue god—and the monstrous creatures he created to plague mortalkind—in the vast and inhospitable wasteland of the Bourne. The magical Veil that contains them has protected humankind for millennia and the monsters are little more than tales told to frighten children. But the Veil has become weak and creatures of Nightmare have come through. To fight them, the races of men must form a great alliance to try and stop the creatures.

But there is dissent. One king won't answer the call, his pride blinding him even to the poison in his own court. Another would see Convocation fail for his own political advantage. And still others believe Convocation is not enough. Some turn to the talents of the Sheason, who can shape the very essence of the world to their will. But their order is divided, on the brink of collapse.

Tahn Junell remembers friends who despaired in a place left barren by war. One of the few who have actually faced the unspeakable horde in battle, Tahn sees something else at work and wonders about the nature of the creatures on the other side of the Veil. He chooses to go to a place of his youth, a place of science, daring to think he can find a way to prevent slaughter, prevent war.

The second title in the Vault of Heaven series, Peter Orullian's Trial of Intentions is a mesmerizing fantasy epic that turns the conventions of the genre on its head


Praise For Trial of Intentions (Vault of Heaven #2)…

"This is an immediately engaging series with interesting characters and story. There’s great detail in this world, which comes with unique rules of magic and science, and the characters are well developed...This book would appeal to fans of Brandon Sanderson, Robert Jordan, J.R.R. Tolkien and Patrick Rothfuss." —The Deseret News

Peter Orullian works in marketing at Xbox, including leading the Music and Entertainment marketing strategy for Xbox LIVE, and has toured as a featured vocalist internationally at major music festivals. He has published several short stories. He is the author of The Unremembered and Trial of Intentions. He lives in Seattle.
Loading...
or
Not Currently Available for Direct Purchase