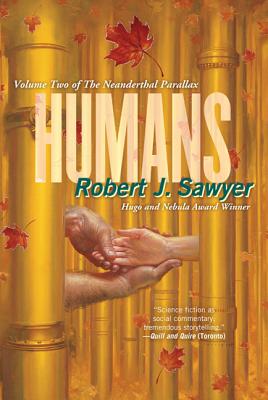 Volume Two of the Neanderthal Parallax

Robert J. Sawyer, the award-winning and bestselling writer, hits the peak of his powers in Humans, the second book of The Neanderthal Parallax

The trilogy tells of our world and a parallel one in which it was the Homo sapiens who died out and the Neanderthals who became the dominant intelligent species. This powerful idea allows Sawyer to examine some of the deeply rooted assumptions of contemporary human civilization dramatically, by confronting us with another civilization, just as morally valid, that has made other choices. In Humans, Neanderthal physicist Ponter Boddit, a character you will never forget, returns to our world and to his relationship with geneticist Mary Vaughan, as cultural exchanges between the two Earths begin.

As we see daily life in another present-day world, radically different from ours, in the course of Sawyer's fast-moving story, we experience the bursts of wonder and enlightenment that are the finest pleasures of science fiction. Humans is one of the best SF novels of the year, and The Neanderthal Parallax is an SF classic in the making.

Humans is a 2004 Hugo Award Nominee for Best Novel.

Robert J. Sawyer is the author of Flashforward, winner of the Aurora Award and the basis for the hit ABC television series. He is also the author of the WWW series—Wake, Watch and Wonder—Hominids, Calculating God, Mindscan, and many other books. He has won the Hugo, Nebula and John W. Campbell Memorial awards—making him one of only seven writers in history to win all three of science-fiction’s top awards for best novel. He was born in Ottawa and lives in Mississauga, Ontario.
Loading...
or support indie stores by buying on