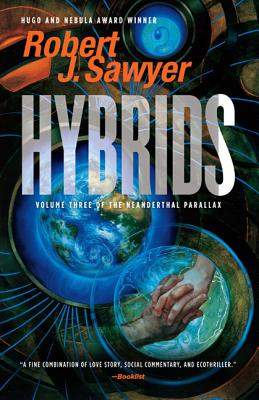 Volume Three of the Neanderthal Parallax

This is the climactic book of Robert J. Sawyer's Neanderthal Parallax trilogy. Torn between two worlds, geneticist Mary Vaughan and Neanderthal physicist Ponter Boddit struggle to find a way to make their relationship work. Aided by banned Neanderthal technology, they plan to conceive the first hybrid child, a symbol of hope for the peaceful coexistence of two versions of reality.

But after an experiment shows that Mary's religious faith--something completely absent among Neanderthals--is a quirk of Homo sapiens neurology, Ponter and Mary must decide whether their child should be predisposed to atheism or belief. Meanwhile, as Mary's Earth faces the impending collapse of its planetary magnetic field, Mary's boss, the enigmatic Jock Krieger, has turned envious eyes on the unspoiled Eden of the Neanderthal world.

In Hybrids, Sawyer concludes his signature speculations about alternative ways to be human, exploding our preconceptions of morality and gender, faith and love.

Praise For Hybrids: Volume Three of the Neanderthal Parallax…

“A fine combination of love story, social commentary, and ecothriller closes a terrific series with a bang.” —Booklist, starred review on Hybrids

“Science fiction has a long tradition of stories examining our hominid cousins…. But few such works exhibit the degree of serious research and fertile inventiveness that Sawyer brings to his trilogy.… All in all, it's an anthropological creation worthy of Le Guin.” —SciFi Weekly on Hybrids