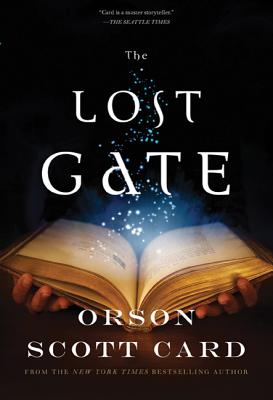 Orson Scott Card's The Lost Gate is the first book in the Mithermages series from the New York Times bestselling author of Ender's Game.

Danny North knew from early childhood that his family was different, and that he was different from them. While his cousins were learning how to create the things that commoners called fairies, ghosts, golems, trolls, werewolves, and other such miracles that were the heritage of the North family, Danny worried that he would never show a talent, never form an outself.

He grew up in the rambling old house, filled with dozens of cousins, and aunts and uncles, all ruled by his father. Their home was isolated in the mountains of western Virginia, far from town, far from schools, far from other people.

There are many secrets in the House, and many rules that Danny must follow. There is a secret library with only a few dozen books, and none of them in English — but Danny and his cousins are expected to become fluent in the language of the books. While Danny's cousins are free to create magic whenever they like, they must never do it where outsiders might see.

Unfortunately, there are some secrets kept from Danny as well. And that will lead to disaster for the North family.

“As always, everyone will be struck by the power of Card's children, always more and less than human, perfect yet struggling, tragic yet hopeful, wondrous and strange.” —Publishers Weekly starred review on Ender's Shadow

“Threads from all the other books in the series flow through this narrative, which fills gaps, fleshes out familiar characterizations, and introduces well-limned new ones. Ender's angst, combined with his handling of the intrigue swirling around him, ensures the depth for which the series is famous.” —Booklist on Ender in Exile