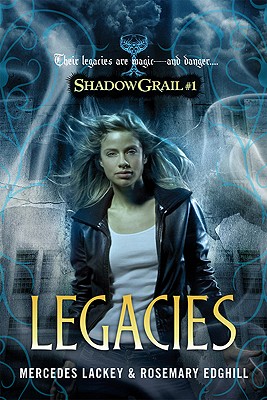 In the wake of the accident that killed her family, Spirit White is spirited away to Oakhurst Academy, a combination school and orphanage in the middle of Montana. There she learns she is a legacy—not only to the school, which her parents also attended, but to magic.

All the students at Oakhurst have magical powers, and although Spirit’s hasn’t manifested itself yet, the administrators insist she has one. Spirit isn’t sure she cares. Devastated by the loss of her family, she finds comfort with a group of friends: Burke Hallows, Lachlann Spears, Muirin Shae, and Adelaide Lake.

But something strange is going on at Oakhurst. Students start disappearing under mysterious circumstances, and the school seems to be trying to cover it up. Spirit and her friends must find out what’s happening—before one of them becomes the next victim…

Mercedes Lackey is the author of the bestselling Valdemar series, the Obsidian Trilogy ("The Outstretched Shadow," "To Light a Candle," and "When Darkness Falls"), the Enduring Flame trilogy ("The Phoenix Unchained," "The Phoenix Endangered," and "The Phoenix Transformed"), and the Tales of the Five Hundred Kingdoms. She has written many other books, including "Trio of Sorcery," "Phoenyx and Ashes," "Sacred Ground," "The Firebird," "The Fairy Godmother," and "Alta." Lackey is the co-author, with Andre Norton, of the Halfblood Chronicles, including "Elvenborn." Mercedes Lackey was born in Chicago and graduated from Purdue University. She has worked as an artist's model, a computer programmer, and for American Airlines, and has written lyrics and recorded more than fifty songs. She lives in Oklahoma.

Rosemary Edghill is a prolific writer in several genres, under her own name and various pseudonyms. She lives in upstate New York with several cats and Cavalier King Charles Spaniels.
Loading...
or
Not Currently Available for Direct Purchase