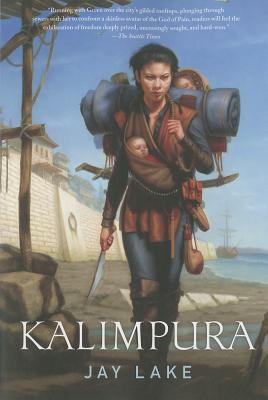 This sequel to Jay Lake's Green and Endurance takes Green back to the city of Kalimpura and the service of the Lily Goddess.

Green is hounded by the gods of Copper Downs and the gods of Kalimpura, who have laid claim to her and her children. She never wanted to be a conduit for the supernatural, but when she killed the Immortal Duke and created the Ox god with the power she released, she came to their notice.

Now she has sworn to retrieve the two girls taken hostage by the Bittern Court, one of Kalimpura's rival guilds. But the Temple of the Lily Goddess is playing politics with her life.

“Assassin and ex-courtesan Green has saved a city and birthed a god. Now she wants to move on--but she's hunted by enemies from her past, the city council is mired in a power struggle and can't provide much aid, and something is stalking goddesses, including the one Green serves. Lake deftly weaves complicated, stubborn characters into a plot that reaches the grandest and most personal scales without ever straining credulity…. This complex, lonesome, haunting novel will appeal to fans of Valente, Monette, and Miéville.” —Publishers Weekly, starred review on Endurance

“There's something both uplifting and melancholy in this fantasy adventure's tone, which 16-year-old Green narrates with a world-weary old soul's experience, emotional weight hanging from every page. Thoughtful fantasy readers will appreciate Green's newfound perspective and the lush details derived from a mixture of Eastern cultures, as well as the sheer audacity of a killer bisexual nonwhite teen mom protagonist.” —Publishers Weekly

“The richness of [Lake's] rendering of urban life as tapestry is genuinely irresistible.” —John Clute on Green

“Running with Green over the city's gilded rooftops, plunging through sewers with her to confront a skinless avatar of the God of Pain, readers will feel the exhilaration of freedom deeply prized, unceasingly sought, and hard-won.” —Seattle Times on Green

“Lake's poetic metaphors and similes and full circle plotting are wonderfully pleasant to read, making this heroic tale one of the best fantasies of the year.” —Sacramento Book Review on Green

Jay Lake was a prolific writer of science fiction and fantasy, as well as an award-winning editor, a popular raconteur and toastmaster, and an excellent teacher at the many writers' workshops he attended. His novels included Tor's publications Mainspring, Escapement, and Pinion, and the trilogy of novels in his Green cycle - Green, Endurance, and Kalimpura. Lake was nominated multiple times for the Hugo Award, the Nebula Award, and the World Fantasy Award. He won the John W. Campbell Award for best new writer in 2004, the year after his first professional stories were published. In 2008 Jay Lake was diagnosed with colon cancer, and in the years after he became known outside the sf genre as a powerful and brutally honest blogger about the progression of his disease. Jay Lake died on June 1, 2014.
Loading...
or support indie stores by buying on