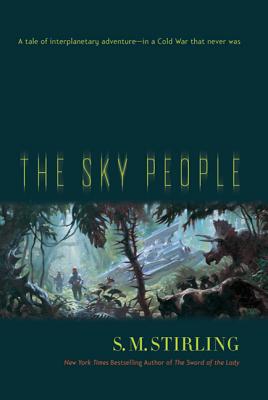 Marc Vitrac was born in Louisiana in the early 1960's, about the time the first interplanetary probes delivered the news that Mars and Venus were teeming with life—even human life. At that point, the "Space Race" became the central preoccupation of the great powers of the world.

Now, in 1988, Marc has been assigned to Jamestown, the US-Commonwealth base on Venus, near the great Venusian city of Kartahown. Set in a countryside swarming with sabertooths and dinosaurs, Jamestown is home to a small band of American and allied scientist-adventurers.

But there are flies in this ointment – and not only the Venusian dragonflies, with their yard-wide wings. The biologists studying Venus's life are puzzled by the way it not only resembles that on Earth, but is virtually identical to it. The EastBloc has its own base at Cosmograd, in the highlands to the south, and relations are frosty. And attractive young geologist Cynthia Whitlock seems impervious to Marc's Cajun charm.

Meanwhile, at the western end of the continent, Teesa of the Cloud Mountain People leads her tribe in a conflict with the Neanderthal-like beastmen who have seized her folk's sacred caves. Then an EastBloc shuttle crashes nearby, and the beastmen acquire new knowledge… and AK47's.

Jamestown sends its long-range blimp to rescue the downed EastBloc cosmonauts, little suspecting that the answer to the jungle planet's mysteries may lie there, among tribal conflicts and traces of a power that made Earth's vaunted science seem as primitive as the tribesfolk's blowguns. As if that weren't enough, there's an enemy agent on board the airship…

Extravagant and effervescent, The Sky People is alternate-history SF adventure at its best.


Praise For The Sky People…

“Powerful and convincing.” —Harry Turtledove on Dies the Fire

“Stirling gives himself a broad canvas on which to display his talent for action, extrapolation, and depiction on the brutal realities of life in the absence of civilized norms.” —David Drake on Dies the Fire

“A masterpiece--the definitive novel about castaways in time.” —Robert J. Sawyer on Island in the Sea of Time

“Utterly engaging...Certain to win the author legions of new readers and fans.” —George R. R. Martin on Island in the Sea of Time

“Exciting and explosive...Against the Tide of Years is even more compelling than Island in the Sea of Time, but just as much fun.” —Jane Lindskold

“Exciting, evocative, and horrifying.” —Poul Anderson on The Domination

S. M. Stirling is the author of numerous SF and fantasy novels, including the popular “Nantucket” series that began with Island in the Sea of Time, Dies the Fire and The Protector’s War. A former lawyer and an amateur historian, he lives in the Southwest with his wife, Jan.
Loading...
or support indie stores by buying on