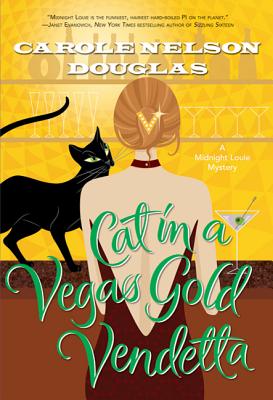 Temple Barr is an ace P.R. wizard when it comes to promoting Las Vegas' hottest clients. She's also an amateur sleuth who has caught her share of bad guys.

B-movie actress Savannah Ashleigh begs Temple to investigate the suspicious death of her rich aunt's handyman. Temple happily takes the case, if for no other reason than to take her mind off her chaotic private life. Her ex-fiance, the Mystifying Max, is back minus his memory. And current fiance Matt Devine has shown up from a stint in Chicago with the promise of a surprising future. Which may or may not include Temple.

As Temple digs into the man's untimely demise she finds plenty of suspect and greedy humans swarming around the ailing Aunt Violet, who means to leave her estate to her resident cats. Temple thinks she's close to solving the case, but it becomes clear to Midnight Louie, Temple's roommate and ace feline detective, that there are more deaths both human and feline coming. Add in the return of a mysterious stalker from the past, and it's murder and mayhem on all fronts for Temple, Louie, and the ones they love in the newest story in the Midnight Louie mystery series.

Cat in a Vegas Gold Vendetta is the twenty-second title in Carole Nelson Douglas's sassy Midnight Louie mystery series. In addition to tales of her favorite feline, Douglas is also the author of the historical suspense series featuring Irene Adler, the only woman ever to have "outwitted" Sherlock Holmes. Douglas resides in Fort Worth, Texas.

Praise For Cat in a Vegas Gold Vendetta…

“Nelson’s 21st Midnight Louie tale is just as twisty, riveting and intriguing as the ones that came before. Even longtime fans of the series are bound to say 'Wow, I never saw that coming!' to the very end.”— RT Book Reviews, Top Pick! 4 1/2 stars, on Cat in an Ultramarine Scheme

“Fans and feline fanciers will no doubt curl up and purr.”—Kirkus Reviews on Cat in a Topaz Tango

“If either Mike Hammer or Columbo had a cat, it would be Midnight Louie.”—Cat Fancy