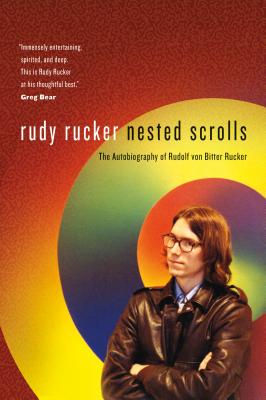 "Nested Scrolls "reveals the true-life adventures of Rudolf von Bitter "Rudy" Rucker mathematician, transrealist author, punk rocker, and computer hacker. It begins with a young boy growing up in Louisville, Kentucky, the son of a businessman father who becomes a clergyman, and a mother descended from the philosopher Hegel. His career goals? To explore infinity, popularize the fourth dimension, seek the gnarl, become a beatnik writer, and father a family.

All the while Rudy is reading science fiction and beat poetry, and beginning to write some pretty strange fiction of his own a blend of Philip K. Dick and hard SF that qualifies him as part of the original circle of writers in the early 1980s that includes Bruce Sterling, William Gibson, John Shirley, and Lewis Shiner, who were the founders of cyberpunk.

At one level, Rucker's genial and unfettered memoir brings us a firsthand account of how he and his contemporaries ushered in our postmodern world. At another, this is the wry and moving tale of a man making his way from one turbulent century to the next.

RUDY RUCKER lives in Los Gatos, California. He has written a number of novels and popular science books, including The Fourth Dimension. He is a retired professor of mathematics and computer science at San Jose State University. His SF novels have twice won the Philip K. Dick Award for best paperback original SF book.

“Nested Scrolls is immensely entertaining, spirited, and deep. This is Rudy Rucker at his thoughtful best.”

“Rudy Rucker is the most consistently brilliant imagination working in SF today.”

“Like all the best memoirists, Rudy Rucker allows us to glimpse through him the contours of our own lives, and to ponder, a little wistfully, why they couldn’t have been more like his.”

—Paul Park, author of A Princess of Roumania

“Travel through a roller-coaster life from the viewpoint of an imaginative boy who grew up to be a mathematician and then moved on into the many-dimensional world of a multi-universe traveling writer. Don’t forget to hang on to the rails.”