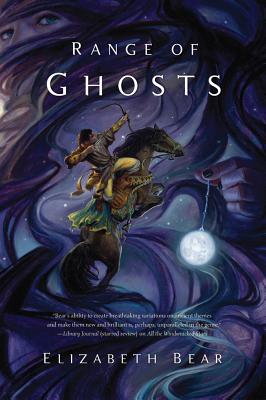 Temur, grandson of the Great Khan, is walking away from a battlefield where he was left for dead. All around lie the fallen armies of his cousin and his brother, who made war to rule the Khaganate. Temur is now the legitimate heir by blood to his grandfather's throne, but he is not the strongest. Going into exile is the only way to survive his ruthless cousin.

Once-Princess Samarkar is climbing the thousand steps of the Citadel of the Wizards of Tsarepheth. She was heir to the Rasan Empire until her father got a son on a new wife. Then she was sent to be the wife of a Prince in Song, but that marriage ended in battle and blood. Now she has renounced her worldly power to seek the magical power of the wizards. These two will come together to stand against the hidden cult that has so carefully brought all the empires of the Celadon Highway to strife and civil war through guile and deceit and sorcerous power.


Praise For Range of Ghosts…

“Bear's ability to create breathtaking variations on ancient themes and make them new and brilliant is, perhaps, unparalleled in the genre."
—Library Journal, starred review, on All the Windwracked Stars


“You should read this book; you should read it because the entire thing—from beginning to end—pushes sense-of-wonder buttons so hard you almost want to hit the pause button, forget about the plot, and look. Bear holds nothing back, and everything that she pulls into her story just gleams with that special wonder of discovery. I could not put this down.”
—The Magazine of Fantasy and Science Fiction on All the Windwracked Stars


“Numerous fantasy authors adopt the tropes of Norse mythology, but Bear actively pursues them, channeling those myths directly rather than overlaying them on more familiar ones. The result demands much from readers, but repays it in vivid, sensual imagery of a wholly different world.”
—Publishers Weekly on By the Mountain Bound

ELIZABETH BEAR was born on the same day as Frodo and Bilbo Baggins, but in a different year. She was the recipient of the John W. Campbell Award for Best New Writer in 2005. She has won two Hugo Awards for her short fiction, and her "Hammered" trilogy is a Locus Award winner.
Loading...
or
Not Currently Available for Direct Purchase