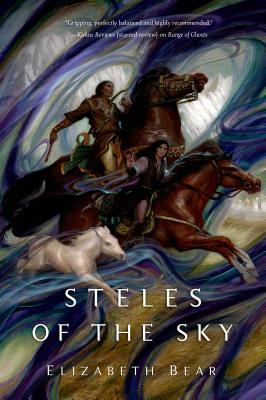 Steles of the Sky (The Eternal Sky #3)

Elizabeth Bear concludes her award-winning epic fantasy trilogy, The Eternal Sky, with Steles of the Sky.

Re Temur, exiled heir to his grandfather's Khaganate, has finally raised his banner and declared himself at war with his usurping uncle. With his companions—the Wizard Samarkar, the Cho-tse Hrahima, and the silent monk Brother Hsiung—he must make his way to Dragon Lake to gather in his army of followers.

Temur has many enemies, and they are not idle. The sorcerer who leads the Nameless Assassins, whose malice has shattered the peace of all the empires of the Celedon Highway, has struck at Temur's uncle already. To the south, in the Rasan empire, a magical plague rages. To the east, the great city of Asmaracanda has burned, and the Uthman Caliph is deposed. And in the hidden ancient empire of Erem, Temur's son has been born, and a new moon has risen in the Eternal Sky.

The Lotus Kingdoms, set in the world of the Eternal Sky
#1 The Stone in the Skull


Praise For Steles of the Sky (The Eternal Sky #3)…

“Wrapping up Bear's complex and beautifully rendered historical-fantasy trilogy.... [F]ully realized characters whose personalities and motivations arise from the dazzlingly detailed cultures and landscapes from which they derive.... It all adds up to an eminently satisfying conclusion. Considering the trilogy as a whole, the overused term masterpiece justifiably applies.” —Kirkus Reviews, starred review