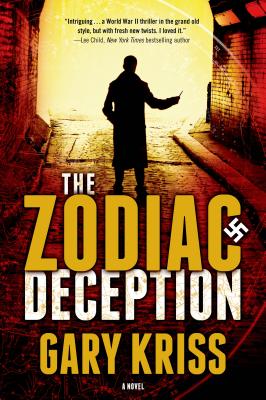 Summer, 1942: The con man known as David Walker didn't exactly volunteer, but OSS chief Wild Bill Donovan convinced him that serving his country and the cause of freedom by posing as German astrologer Peter Kepler was a better use of his time than going to prison for impersonating a Princeton University professor. His mission: use his skills in illusion, sleight of hand and deception to gain Heinrich Himmler's trust and persuade him to assassinate Adolph Hitler.

In a plot that involves German resistance members in high places, Walker walks a tightrope of deceit, playing on the high command's fascination with the occult to penetrate the highest levels of Nazi power in a daring plan to eliminate the Nazi Fu]hrer.

In action that takes him from Berlin to Paris to Cairo; from Hitler's Eagle Nest to Himmler's occult Wewelsburg Castle, Gary Kriss's "The Zodiac Deception "is a memorable debut, an unforgettable thrill ride through the dark heart of World War II Germany.


Praise For The Zodiac Deception…

"A refreshingly inventive, exciting WWII thriller. A con artist taught escapes by Houdini, spiritualism tricks by Conan Doyle and Method acting by Stanislavski, his desperate mission takes him from Berlin to Paris to the deserts of North Africa and the intrigues of Cairo. It's unlike anything you've read before."
—David Morrell, New York Times bestselling author of Murder as a Fine Art

"A taut historical thriller. Kriss delivers an action-packed debut as a con man, a film maker and a priest utilize the Nazi's fascination with Occult in a plot to assassinate Hitler." —Lisa Gardner, #1 New York Times bestselling author of Touch and Go

A smart, sophisticated, and inventive thriller, THE ZODIAC DECEPTION is an utterly convincing and compelling debut. The effort Kriss put into the story shows — and the relationship between Max, double agent and Nazi filmmaker, and Peter, the con man who must assassinate Hitler, is one for the ages. Don’t miss it." -J.T. Ellison, New York Times bestselling author of WHEN SHADOWS FALL

“Entertaining…Kriss sweeps readers along with complex action sequences and an impressive array of tangential challenges. Crisp prose and a well-structured storyline bode well for the sequel.”—Publishers Weekly

GARY KRISS, an award-winning reporter for the New York Times, was born in Brooklyn and raised in a small town in Eastern Tennessee. He and his wife live in a northern suburb of New York City. The Zodiac Deception is his first novel.
Loading...
or
Not Currently Available for Direct Purchase