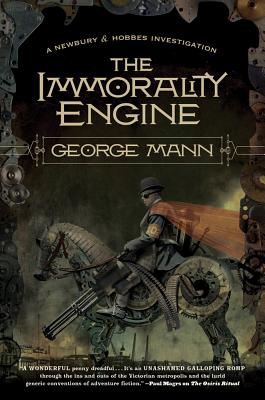 On the surface, life is going well for Victorian special agent Sir Maurice Newbury, who has brilliantly solved several nigh-impossible cases for Queen Victoria with his indomitable assistant, Miss Veronica Hobbes, by his side. But these facts haven’t stopped Newbury from succumbing increasingly frequently to his dire flirtation with the lure of opium. His addiction is fueled in part by his ill-gotten knowledge of Veronica’s secret relationship with the queen, which Newbury fears must be some kind of betrayal. Veronica, consumed by worry and care for her prophetic but physically fragile sister Amelia, has no idea that she is a catalyst for Newbury’s steadily worsening condition.

Veronica and Newbury’s dear friend Bainbridge, the Chief Investigator at Scotland Yard, tries to cover for him as much as possible, but when the body of a well known criminal turns up, Bainbridge and Veronica track Newbury down in an opium den and drag him out to help them with the case. The body is clearly, irrefutably, that of the man in question, but shortly after his body is brought to the morgue, a crime is discovered that bears all the dead man’s hallmarks. Bainbridge and Veronica fear someone is committing copycat crimes, but Newbury is not sure. Somehow, the details are too perfect for it to be the work of a copycat. But how can a dead man commit a crime?


Praise For The Immorality Engine…

Praise for The Affinity Bridge:

“Mann turns out a riveting page-turner that mixes the society of manners in turn-of-the-century London with a gritty and brutal murder mystery. And in the midst of all this, automatons clank about, zombies lurk in the night and dirigibles float majestically in the sky—until they crash and burn….Will leave readers clamoring for the next book.”
--AM New York

“A science fantasy novel that should appeal to lovers of both genres. One of the biggest surprises of the year, and I can’t recommend the book enough.”
--Fantasy Book Critic

“Steampunk is making a comeback, and with this novel Mann is leading the charge…. An engaging melodrama that rattles along at a breakneck pace.”
--The Guardian

George Mann edited the "Solaris Book of New Science Fiction "anthology series and is the author of a number of fiction and nonfiction books, including "The Mammoth Encyclopedia of Science Fiction." The first two Newbury & Hobbes Investigations, "The Affinity Bridge "and "The Osiris Ritual," ""were his first novels.
Loading...
or
Not Currently Available for Direct Purchase