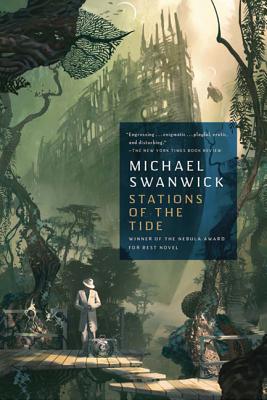 Stations of the Tide

The Nebula Award-wining novel from Michael Swanwick—one of the most brilliantly assured and darkly inventive writers of contemporary fiction—a masterwork of radically altered realities and world-shattering seductions.

The Jubilee Tides will drown the continents of the planet Miranda beneath the weight of her own oceans. But as the once-in-two-centuries cataclysm approaches, an even greater catastrophe threatens this dark and dangerous planet of tale-spinners, conjurers, and shapechangers.

A man from the Bureau of Proscribed Technologies has been sent to investigate. For Gregorian has come, a genius renegade scientist and charismatic bush wizard. With magic and forbidden technology, he plans to remake the rotting, dying world in his own evil image—and to force whom or whatever remains on its diminishing surface toward a terrifying and astonishing confrontation with death and transcendence.

This novel of surreal hard SF was compared to the fiction of Gene Wolfe when it was first published, and the author has gone on in the two decades since to become recognized as one of the finest living SF and fantasy writers.


Praise For Stations of the Tide…

“One of the strangest surrealistic science fiction novels you'll read….It slowly and quietly impresses you with its brilliance.” —Tampa Tribune

MICHAEL SWANWICK has received the Nebula, Theodore Sturgeon, World Fantasy and Hugo Awards, and has the pleasant distinction of having been nominated for and lost more of these same awards than any other writer. His novels include Stations of the Tide, Bones of the Earth, two Darger and Surplus novels, and The Iron Dragon's Mother. He has also written over a hundred and fifty short stories - including the Mongolian Wizard series on Tor.com - and countless works of flash fiction. He lives in Philadelphia with his wife, Marianne Porter.
Loading...
or support indie stores by buying on