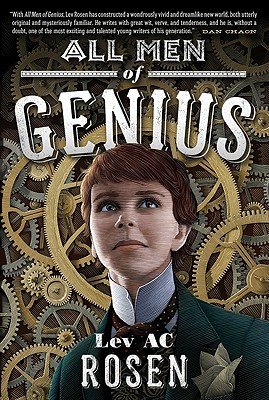 All Men of Genius

Inspired by two of the most beloved works by literary masters, All Men of Genius takes place in an alternate Steampunk Victorian London, where science makes the impossible possible.

Violet Adams wants to attend Illyria College, a widely renowned school for the most brilliant up-and-coming scientific minds, founded by the late Duke Illyria, the greatest scientist of the Victorian Age. The school is run by his son, Ernest, who has held to his father’s policy that the small, exclusive college remain male-only. Violet sees her opportunity when her father departs for America. She disguises herself as her twin brother, Ashton, and gains entry.

But keeping the secret of her sex won’t be easy, not with her friend Jack’s constant habit of pulling pranks, and especially not when the duke’s young ward, Cecily, starts to develop feelings for Violet’s alter ego, “Ashton.” Not to mention blackmail, mysterious killer automata, and the way Violet’s pulse quickens whenever the young duke, Ernest (who has a secret past of his own), speaks to her. She soon realizes that it’s not just keeping her secret until the end of the year faire she has to worry about: it’s surviving that long.

Praise For All Men of Genius…

“With All Men of Genius, Lev Rosen has constructed a wonderously vivid and dreamlike new world, both utterly original and mysteriously familiar. He writes with great wit, verve and tenderness, and he is without doubt, one of the most exciting and talented young writers of his generation.”
--Dan Chaon, bestselling author of You Remind Me of Me

“All Men of Genius is utterly charming. A large ensemble cast revolves around the central character, Violet Adams, as smoothly as gears in a precision clock. Like the best steampunk, it feels as though it were written in a much older time. Witty, dashing, and a little bit dangerous."--Mary Robinette Kowal, author of Nebula and Locus award nominee Shades and Milk and Honey

“All Men Of Genius is filled with a contagious joyful abandon.”
--Angela Zeman, author of The Witch and the Borscht Pearl

LEV AC ROSEN grew up in Manhattan. He attended Oberlin College and received his MFA in creative writing from Sarah Lawrence. His work has been featured in Esopus Magazine and on various blogs including Tor.com. He lives in lower Manhattan.
Loading...
or
Not Currently Available for Direct Purchase