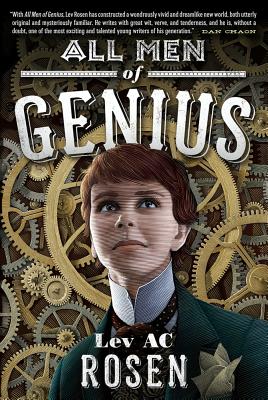 All Men of Genius

Inspired by two of the most beloved works by literary masters, "All Men of Genius "takes place in an alternate Steampunk Victorian London, where science makes the impossible possible.

Violet Adams wants to attend Illyria College, a widely renowned school for the most brilliant up-and-coming scientific minds, founded by the late Duke Illyria, the greatest scientist of the Victorian Age. The school is run by his son, Ernest, who continues his father's policy that the small, exclusive college remain male-only. Violet sees her opportunity when her father departs for America. She disguises herself as her twin brother, Ashton, and gains entry.

But keeping the secret of her sex won't be easy, not with her friend Jack's constant habit of pulling pranks, and especially not when the duke's young ward, Cecily, starts to develop feelings for Violet's alter ego, "Ashton." Not to mention blackmail, mysterious killer automata, and the way Violet's pulse quickens whenever the young duke, Ernest, speaks to her. She soon realizes that it's not just keeping her secret until the end of the year faire she has to worry about: it's surviving that long.


Praise For All Men of Genius…

One of Amazon’s Best SF/F Books of September 2011

“Rosen’s lighthearted debut puts a steampunk spin on the Victorian comedy of manners while sneakily critiquing the gender biases of both genres… Decommissioned robots, mysterious mechanisms, strange squid creatures, blackmail, and a number of vivid characters add up to a great deal of fun.”
—Publishers Weekly

“A nimble twist on Victorian romance that’s woven into Rosen’s intricate web of attractions, repulsions, and matrimonial machinations. But he never lets his mesh of relationships—or his fluid, playful views of sexuality—overwhelm a sprawl of vibrant, witty characters… Steampunk soap-opera, as elevated as it is, isn’t all Rosen has up his sleeve. Tackling the genre at its root, All Men slyly examines the psychology and the aesthetics behind the act of human invention.”
—The Onion A.V. Club, A-

“Rosen writes with color and verve, particularly in his descriptions of mechanical marvels, and also offers moments of unexpected poignancy.”  —Kirkus Reviews

LEV AC ROSEN grew up in Manhattan. He attended Oberlin College and received his MFA in creative writing from Sarah Lawrence. His work has been featured in Esopus Magazine and on Tor.com. He lives in lower Manhattan, New York.
Loading...
or
Not Currently Available for Direct Purchase