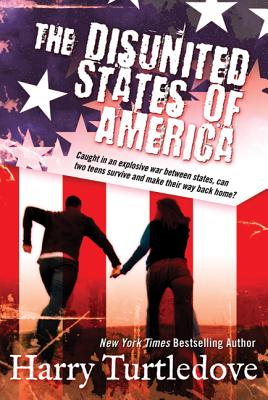 The Disunited States of America

A Novel of Crosstime Traffic

In Harry Turtledove's The Disunited States of America, Justin's having the worst trip ever. He and his mother are Time Traders, traveling undercover to different alternate realities of Earth so they can take valuable resources back to their own timeline. In some of these worlds, Germany won World War I or the world has been destroyed by nuclear warfare. Justin and his mother are in an America that never became the United States: each state is like a country, and many of them are at war with each other. Their mission takes them to Virginia, which is on the verge of bloody violence with Ohio.

Beckie is from California, and like the rest of her world, unaware that Time Traders exist. The only reason she's in small town Virginia is because her grandmother dragged her there to visit old relatives. Beckie is just as horrified by the violence and racism of the alternate Virginia as Justin is, and the two are drawn to one another. But when full-fledged war breaks out between the States, including a biologically designed plague, will either of them manage to get back home? Forget about home: Will they make it out alive?


Praise For The Disunited States of America: A Novel of Crosstime Traffic…

“The best so far in this Turtledove series, with characters that you care about and action that, while grim, is plausible and engaging.” —Booklist on The Disunited States of America

“Readers nostalgic for the SF novels of Robert A. Heinlein and Andre Norton will find much to enjoy…This is a rousing story that reminds us that ‘adventure' is really someone else in deep trouble a long way off.” —Publishers Weekly on Gunpowder Empire

“Turtledove has proved he can divert his readers to astonishing places. He's developed a cult following over the years; and if you've already been there, done that with real-history novelists Patrick O'Brian, Dorothy Dunnett, or George MacDonald Fraser, for your Next Big Enthusiasm you might want to try Turtledove. I know I'd follow his imagination almost anywhere.” —San Jose Mercury News on Harry Turtledove

The author of many science fiction and fantasy novels, including The Guns of the South, the "World War" series, and The Case of the Toxic Spell Dump, Harry Turtledove lives in Los Angeles with his wife, novelist Laura Frankos, and their four daughters.
Loading...
or support indie stores by buying on