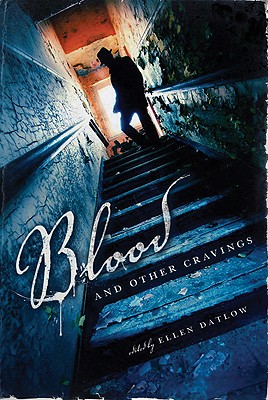 Blood and Other Cravings (Hardcover)

When we think of vampires, instantly the image arises: fangs sunk deep into the throat of the victim. But bloodsucking is merely one form of vampirism. For this brilliantly original anthology, Ellen Datlow has commissioned stories from many of the most powerfully dark voices in contemporary horror, who conjure tales of vampirism that will chill readers to the marrow.

In addition to the traditional fanged vampires, Datlow presents stories about the leeching of emotion, the draining of the soul, and other dark deeds of predation and exploitation, infestation, and evisceration…tales of life essence, literal or metaphorical, stolen.

Seventeen stories, by such award-winning authors as Elizabeth Bear, Richard Bowes, Kathe Koja, Margo Lanagan, Carol Emshwiller, and Lisa Tuttle will petrify readers. With dark tales by Laird Barron, Barry Malzberg and Bill Pronzini, Kaaron Warren, and other powerful voices, Blood and Other Cravings will redefine the terror of vampires and vampirism.

ELLEN DATLOW is a winner of nine World Fantasy Awards, two Bram Stoker Awards, two International Horror Guild Awards, five Hugo Awards, and four Locus Awards. She has been the fiction editor of "Omni "and Scifi.com and has edited many successful anthologies, including "The Dark," "The Coyote Road," "Inferno," and "The Year's Best Horror." Datlow has also coedited "Haunted Legends," The Year's Best Fantasy and Horror series, "The Faery Reel," "A Wolf at the Door," and "Swan Sister," among many others. She lives in Manhattan.

Praise For Blood and Other Cravings: Original Stories of Vampires and Vampirism by Today's Greatest Writers of Dark Fiction…

“Watch your hackles when you read this book; Ms. Datlow and her horrormongers are out to raise them.” —Dallas Morning News on The Dark

“Inferno again proves Ellen Datlow worthy of her reputation as an acute judge of talent and an editor that attracts the best in horror and dark fantasy.” —Tim Lieder, Whispers of Wickedness

“Any anthology of stories edited by Ellen Datlow is a volume to savor.” —Cemetery Dance on The Dark