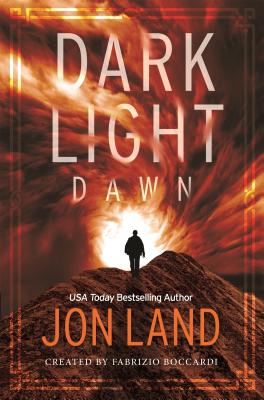 From author Jon Land and creator Fabrizio Boccardi comes Dark Light: Dawn, a heart-pounding supernatural thriller about a deadly, global epidemic and the man who holds the power to either save the world or destroy it.

Since the dawn of time good and evil have challenged the free will of man. Now the time has come for one man to choose for all human kind.

With an uncanny ability to survive any combat situation, Max Younger has built a heroic life for himself as a Navy SEAL. That is, until a rogue rescue operation plunges him back into a past he thought he’d escaped forever.

Waiting for him back home in New York are terrible, long-hidden truths rooted in the tragic death of his father. But the origin of those truths lie even further back than that, and Max finds himself ensnared in a sinister plot involving nothing less than the biblical apocalypse.

The explosive conflagration of events reunites him with the only woman he ever loved: Victoria Tanoury a brilliant infectious disease specialist working for the World Health Organization, who’s on the front lines in a battle to stop the spread of a deadly pestilence threatening the planet. Max’s reunion with Vicky comes amid a combat mission, in which their dual quests merge in a desperate fight for survival against forces of unspeakable evil.

Across the globe, inexplicably diabolic events are rising, sparked by a fearsome plan to visit the End of Days upon civilization in horrific form, as the lines between science and superstition become increasingly blurred. Max finds himself mired in a titanic struggle within his own soul, between love and hate, unsure whether his ultimate fate is to help fight the evil. . . or embrace it in the shadow of the Dawn of a Dark Light.

“A fantastic, incredible, can’t-put-it-down book . . . Dark Light: Dawn is a rip-roaring story grounded in science, but taking the reader on a terrifying whirl through the Apocalypse, the struggle between good and evil, pestilence and the End of Days. If you like my books, or Michael Crichton's, or similar science-based thrillers, then this is the book for you. A terrific read!” —Douglas Preston,#1 New York Times bestselling author

"Has everything -- mystery, action, sex, violence, widescreen apocalypse and close-up chills, along with the creepiest little girl you'll never want to meet. 'I couldn't put it down' has become such a cliche but... I couldn't put it down.” —Paul Wilson, New York Times bestselling author

“A complex labyrinth of mystery and suspense. Strategically plotted, complete with convoluted twists and turns, all leading up to a cataclysmic ending that will shock you. A rollercoast ride of epic proportions!” —TopShelf Magazine

Jon Land is the USA Today bestselling author of more than fifty books, over ten of which feature Texas Ranger Caitlin Strong. The critically acclaimed series has won more than a dozen awards, including the 2019 International Book Award for Best Thriller for Strong as Steel. He is also the author of Chasing the Dragon, a detailed account of the War on Drugs written with one of the most celebrated DEA agents of all time. A graduate of Brown University, Land lives in Providence, Rhode Island and received the 2019 Rhode Island Authors Legacy Award for his lifetime of literary achievements.

FABRIZIO BOCCARDI is an entrepreneur, investor, creator, producer, and CEO & Chairman of the Board of Directors of King Midas World Entertainment Inc. Boccardi is the creator and owner of the multimedia brand and franchise the Tyrant. In addition, he controls numerous investments in the United States and abroad.
Loading...
or
Not Currently Available for Direct Purchase