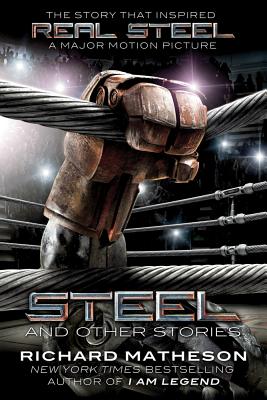 Imagine a future in which the sport of boxing has gone high-tech. Human boxers have been replaced by massive humanoid robots. And former champions of flesh-and-blood are obsolete . . . .

Richard Matheson's classic short story is now the basis for Real Steel, a gritty, white-knuckle film starring Hugh Jackman. But "Steel," which was previously filmed as a powerful episode of the original Twilight Zone television series, is just one of over a dozen unforgettable tales in this outstanding collection, which includes two new stories that have never appeared in any previous Matheson collection. Also featured is a bizarre satirical fantasy, "The Splendid Source," that was turned into an episode of The Family Guy.

Richard Matheson was recently inducted into the Science Fiction Hall of Fame. Steel demonstrates once again the full range of his legendary imagination.

Richard Matheson is The New York Times bestselling author of I Am Legend, Hell House, Somewhere in Time, The Incredible Shrinking Man, A Stir of Echoes, The Beardless Warriors, The Path, Seven Steps to Midnight, Now You See It..., and What Dreams May Come, among others. He was named a Grand Master of Horror by the World Horror Convention, and received the Bram Stoker Award for Lifetime Achievement. He has also won the Edgar, the Spur, and the Writer's Guild awards. In 2010, he was inducted into the Science Fiction Hall of Fame. In addition to his novels Matheson wrote several screenplays for movies and TV, including "Nightmare at 20,000 Feet," based on his short story, along with several other Twilight Zone episodes. He was born in New Jersey and raised in Brooklyn, and fought in the infantry in World War II. He earned his bachelor's degree in journalism from the University of Missouri. Matheson died in June, 2013, at the age of eighty-seven.

Praise For Steel: And Other Stories…

“The author who influenced me the most as a writer was Richard Matheson.”
--Stephen King

“His stories not only entertain but touch the mind and heart.”
--Dean Koontz