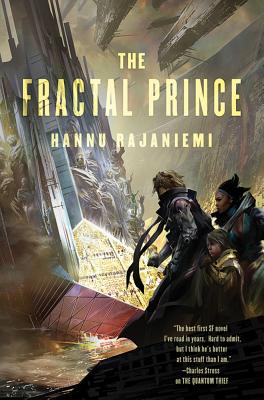 ""The good thing is, no one will ever die again. The bad thing is, everyone will want to.""

A physicist receives a mysterious paper. The ideas in it are far, far ahead of current thinking and quite, quite terrifying. In a city of "fast ones," shadow players, and jinni, two sisters contemplate a revolution.
And on the edges of reality a thief, helped by a sardonic ship, is trying to break into a Schrodinger box for his patron. In the box is his freedom. Or not.

Jean de Flambeur is back. And he's running out of time.

In Hannu Rajaniemi's sparkling follow-up to the critically acclaimed international sensation "The Quantum Thief, " he returns to his awe-inspiring vision of the universe and we discover what the future held for Earth.


Praise For The Fractal Prince…

Praise for The Quantum Thief:
“Spectacularly and convincingly inventive, assured and wholly spellbdinding: one of the most impressive debuts in years.”  —Kirkus Reviews, starred review

“Outstanding… A storytelling skill rarely found from even the most experienced authors.”
—Library Journal, starred review

"The best first SF novel I’ve read in years. Hard to admit, but I think he’s better at this stuff than I am.” —Charles Stross

“Rajaniemi has spectacularly delivered on the promise that this is likely to be the most important SF novel we’ll see this year.” —Locus

Born and raised in Finland, HANNU RAJANIEMI lives in Edinburgh, Scotland, where he is a founding director of a financial consultancy, ThinkTank Maths. He is the holder of several advanced degrees in mathematics and physics. Multilingual from an early age, he writes his science fiction in English. He is the author of The Quantum Thief, The Fractal Prince and The Causal Angel.
Loading...
or
Not Currently Available for Direct Purchase