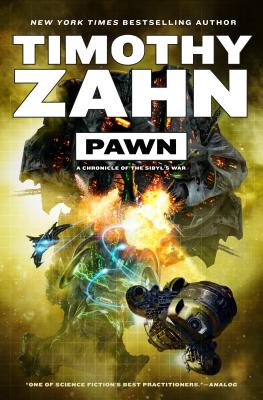 Nicole Lee’s life is going nowhere. No family, no money, and stuck in a relationship with a thug named Bungie. But, after one of Bungie’s “deals” goes south, he and Nicole are whisked away by a mysterious moth-like humanoid to a strange ship called the Fyrantha.

Once aboard, life on the ship seems too good to be true. All she has to do is work on one of the ship’s many maintenance crews. However, she learned long ago that nothing comes without a catch. When she’s told to keep quiet and stop asking questions, she knows she is on to something.

Nicole soon discovers that many different factions are vying for control of the Fyrantha, and she and her friends are merely pawns in a game beyond their control. But, she is tired of being used, and now Nicole is going to fight.

Timothy Zahn is the author of more than forty science fiction novels. He has also written many short stories, as well as Cascade Point, which won the Hugo Award for best novella. His other works include the Dragonback series, of which Dragon and Thief was an ALA Best Book for Young Adults, and the bestselling Star Wars™ novel, Heir to the Empire. Zahn lives in Oregon.
Loading...
or
Not Currently Available for Direct Purchase