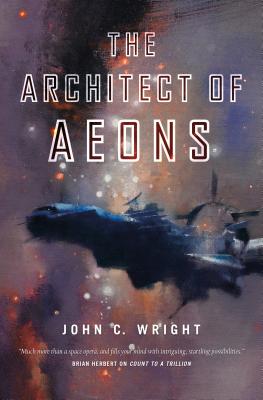 The Architect of Aeons

Book Four of the Eschaton Sequence

The epic and mind-blowing finale to this visionary space opera series surpasses all expectation: Menelaus Montrose, having forged an uneasy alliance with his immortal adversary, Ximen del Azarchel, maps a future on a scale beyond anything previously imagined. No longer concerned with the course of history across mere millennia, Montrose and del Azarchel have become the architects of aeons, bringing forth minds the size of planets as they steer the bizarre intellectual descendants of an extinct humanity.

Ever driving their labors and their enmity is the hope of reunion with their shared lost love, the posthuman Rania, whose eventual return is by no means assured, but who may unravel everything these eternal rivals have sought to achieve.

John C. Wright's The Architect of Aeons is the latest in his millennia spanning space opera.


Praise For The Architect of Aeons: Book Four of the Eschaton Sequence…

JOHN C. WRIGHT is an attorney turned SF and fantasy writer. He has published short fiction in Asimov’s SF and elsewhere, and wrote the Chronicles of Chaos, The Golden Age, and The War of Dreaming series. His novel Orphans of Chaos was a finalist for the Nebula Award in 2005.
Loading...
or
Not Currently Available for Direct Purchase