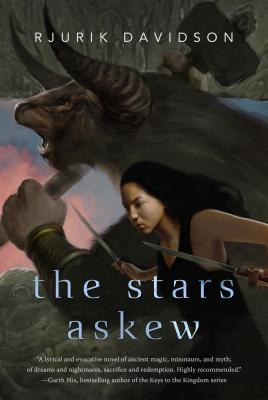 The Stars Askew is the highly anticipated sequel to the New Weird adventure begun by talented young author Rjurik Davidson. With the seditionists in power, Caeli-Amur has begun a new age. Or has it? The escaped House officials no longer send food, and the city is starving.

When the moderate leader Aceline is murdered, the trail leads Kata to a mysterious book that explains how to control the fabled Prism of Alerion. But when the last person to possess the book is found dead, it becomes clear that a conspiracy is afoot. At its center is former House Officiate Armand, who has hidden the Prism. Armand is vying for control of the Directorate, the highest political position in the city, until Armand is betrayed and sent to a prison camp to mine deadly bloodstone.

Meanwhile, Maximilian is sharing his mind with another being: the joker-god Aya. Aya leads Max to the realm of the Elo-Talern to seek a power source to remove Aya from Max's brain. But when Max and Aya return, they find the vigilants destroying the last remnants of House power.

It seems the seditionists' hopes for a new age of peace and prosperity in Caeli-Amur have come to naught, and every attempt to improve the situation makes it worse. The question now is not just whether Kata, Max, and Armand can do anything to stop the bloody battle in the city, but if they can escape with their lives.

Rjurik Davidson, a young Australian author who won the Aurealis Award for Best Newcomer some years ago, has been writing about the city of Caeli-Amur for nearly a decade. His debut novel, Unwrapped Sky is set in this city-state where magic and technology are interchangeable; where minotaurs and sirens are real; where philosopher-assassins and seditionists are not the most dangerous elements in a city alive with threat. During the day, the ordinary citizens do what they must to get along. But at night, the spirit of the ancient city comes alive, to haunt the old places . . .
or
Not Currently Available for Direct Purchase
Copyright © 2020 American Booksellers Association