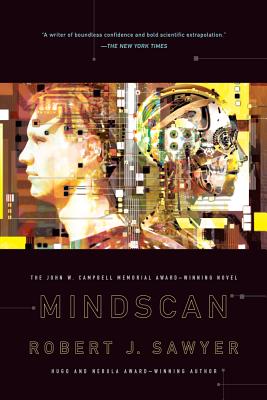 Hugo Award-winning author Robert J. Sawyer is back with Mindscan, a pulse-pounding, mind-expanding standalone novel, rich with his signature philosophical and ethical speculations, all grounded in cutting-edge science.

Jake Sullivan has cheated death: he's discarded his doomed biological body and copied his consciousness into an android form. The new Jake soon finds love, something that eluded him when he was encased in flesh: he falls for the android version of Karen, a woman rediscovering all the joys of life now that she's no longer constrained by a worn-out body either.

But suddenly Karen's son sues her, claiming that by uploading into an immortal body, she has done him out of his inheritance. Even worse, the original version of Jake, consigned to die on the far side of the moon, has taken hostages there, demanding the return of his rights of personhood. In the courtroom and on the lunar surface, the future of uploaded humanity hangs in the balance.

Mindscan is vintage Sawyer -- a feast for the mind and the heart.

“Sawyer deftly examines what a future might be like in two neighboring countries that have become polar opposites. And he focuses on the legal and moral ramifications involved in various definitions of humanity in an intriguing and stylistically fine story. Grade: A.” —Rocky Mountain News
"“Sawyer's most ambitious work to date; a brilliant and innovative novel that positively sings with humor, insight, and depth.” —SF Site

“With his customary flair for combining hard science with first-rate storytelling, Sawyer imagines a future of all-too-real possibilities.” —Library Journal

“This tightly plotted hard-SF novel offers plenty of philosophical speculation on the ethics of bio-technology and the nature of consciousness.” —Publishers Weekly

“A delightful read that grips the reader with engaging characters and cosmic ideas.” —Winnipeg Free Press"