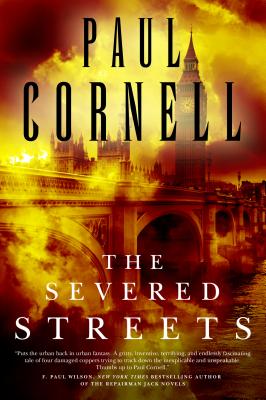 Desperate to find a case to justify the team's existence, with budget cuts and a police strike on the horizon, Quill thinks he's struck gold when a cabinet minister is murdered by an assailant who wasn't seen getting in or out of his limo. A second murder, that of the Commissioner of the Metropolitan Police, presents a crime scene with a message...identical to that left by the original Jack the Ripper.

The new Ripper seems to have changed the MO of the old completely: he's only killing rich white men. The inquiry into just what this supernatural menace is takes Quill and his team into the corridors of power at Whitehall, to meetings with MI5, or 'the funny people' as the Met call them, and into the London occult underworld. They go undercover to a pub with a regular evening that caters to that clientele, and to an auction of objects of power at the Tate Modern.

Meanwhile, in Paul Cornell's The Severed Streets, the Ripper keeps on killing and finally the pattern of those killings gives Quill's team clues towards who's really doing this....


Praise For The Severed Streets…

"This book is a strong follow-up, a good standalone story, and an excellent read for fans of dark urban fantasy."—Publishers Weekly

Paul Cornell is a writer of science fiction and fantasy in prose, comics and television, one of only two people to be Hugo Award nominated for all three media. A New York Times #1 Bestselling author, he's written Doctor Who for the BBC, Wolverine for Marvel, and Batman & Robin for DC. He is the author of the Witches of Lychford series for Tor.com Publishing. He's won the BSFA Award for his short fiction, an Eagle Award for his comics, and shares in Writer's Guild Award for his TV work.
Loading...
or
Not Currently Available for Direct Purchase