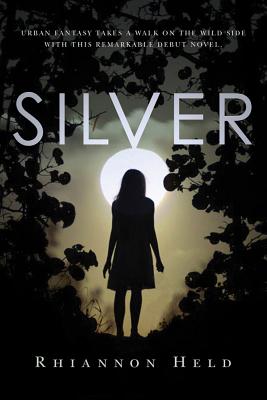 Urban fantasy takes a walk on the wild side in "Silver," the remarkable debut novel from Rhiannon Held.

Andrew Dare is a werewolf. He's the enforcer for the Roanoke pack, and responsible for capturing or killing any Were intruders in Roanoke's territory. But the lone Were he's tracking doesn't smell or act like anyone he's ever encountered. And when he catches her, it doesn't get any better. She's beautiful, she's crazy, and someone has tortured her by injecting silver into her veins. She says her name is Silver, and that she's lost her wild self and can't shift any more.

The packs in North America have a live-and-let-live attitude, and try not to overlap with each other. But Silver represents a terrible threat to every Were on the continent.

Andrew and Silver will join forces to track down this menace while discovering their own power and their passion for each other.

"Wow. What an amazing read! Held has taken a completely new and utterly believable look at werewolves and pack-based society and spun an engrossing tale that was so engaging I stayed up until 3am to finish it. She writes with the assurance and subtlety of an old hand while bringing something completely new to Urban Fantasy. I loved the characters and the marvelous twists of the story. Silver is a remarkable debut; I'm blown away."  —Kat Richardson, bestselling author of Greywalker