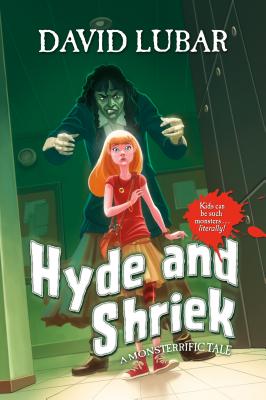 “This is a wonderful retelling of the Dr. Jekyll and Mr. Hyde story. When Ms. Clevis suddenly splits apart into two different personalities, it's up to the kids in her sixth grade science class to put her back together again. This is a fun and slightly creepy new series that should have kids on the edge of their seats.”
— Janice Hunsche, Kaleidosaurus Books, Fishers, IN
View the List

There's something strange going on at Washington Irving Elementary School. People are turning into monsters-literally!

Ms. Clevis is one of the most popular teachers at Washington Irving. Until the morning she accidentally puts some of the wrong ingredients into her breakfast smoothie. Suddenly she finds herself switching back and forth between mean substitute teacher Ms. Hyde and a sweet sixth grade girl named Jackie. Will Jackie figure out the cure before she changes into the horrible Ms. Hyde forever? Find out in David Lubar's Hyde and Shriek.

“Whoever thinks the short story is dead, or that kids don't like short stories, hasn't talked to any real live kids and hasn't read the latest in this popular series.” —School Library Journal on Attack of the Vampire Weenies

“Bullies and others get their due in this hilarious new collection of 35 warped and creepy tales by the master of the ‘weenie' story.” —Buffalo News on The Battle of the Red Hot Pepper Weenies

“This book will talk itself right off the shelves, and reluctant readers will devour it.” —School Library Journal on The Curse of the Campfire Weenies

“Another cool collection. This would be perfect to read around a campfire--or at any sleepover. They are creepy, but also hilarious.” —Detroit Free Press on The Curse of the Campfire Weenies

“Lubar strikes again. Another winning round-up.” —Booklist on Invasion of the Road Weenies

“This spring's most coveted title.” —The Arizona Republic on Invasion of the Road Weenies

“These stories creeped us out -- and we loved it. Four stars!” —Chicago Tribune on In the Land of the Lawn Weenies