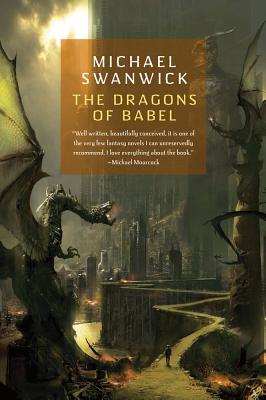 The Dragons of Babel (Paperback)

A fantasy masterpiece from a five-time Hugo Award winner!

A war-dragon of Babel crashes in the idyllic fields of a post-industrialized Faerie and, dragging himself into the nearest village, declares himself king and makes young Will his lieutenant. Nightly, he crawls inside the young fey's brain to get a measure of what his subjects think. Forced out of his village, Will travels with female centaur soldiers, witnesses the violent clash of giants, and acquires a surrogate daughter, Esme, who has no knowledge of the past and may be immortal.

Evacuated to the Tower of Babel--infinitely high, infinitely vulgar, very much like New York City--Will meets the confidence trickster Nat Whilk. Inside the Dread Tower, Will becomes a hero to the homeless living in the tunnels under the city, rises as an underling to a haint politician, meets his one true love–a high-elven woman he dare not aspire to.

You've heard of hard SF: This is hard fantasy from a master of the form.

Michael Swanwick is the winner of five Hugo Awards for his short fiction. His several novels include the Nebula-winning Stations of the Tide, the time-travel novel Bones of the Earth, and the “industrial fantasy” novels The Iron Dragon’s Daughter and The Dragons of Babel. He lives in Philadelphia.

Praise For The Dragons of Babel…

“The Dragons of Babel is an unqualified masterpiece representing the pinnacle of modern fantasy. Simply put, it is great fantasy as great literature.” —SF Site.com

“A smart, stark steampunk fantasy. It's gritty and magical and, in sensibility, is similar to Neil Gaiman's Neverwhere and MirrorMask. Original and dashing, The Dragons of Babel is a breath of fresh air.” —Starlog

“If you haven't read Michael Swanwick yet, you've been missing some wonderful prose…. Con men and ward heelers, cluricauns and hobgoblins, and a stunningly beautiful elf-woman who rides a hippogriff all entice and enrapture Will, and the reader as well.” —The San Diego Union-Tribune