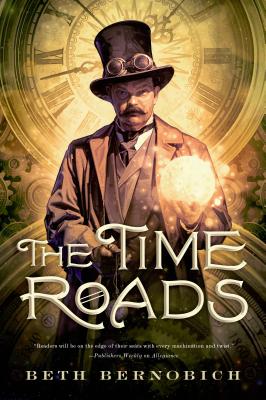 Éire is one of the most powerful empires in the world. The Anglian Dependencies are a dusty backwater filled with resentful colonial subjects, Europe is a disjointed mess, and many look to Éire for stability and peace. In a series of braided stories, Beth Bernobich has created a tale about the brilliant Éireann scientists who have already bent the laws of nature for Man's benefit. And who now are striving to conquer the nature of time.

The Golden Octopus: Áine Lasairíona Devereaux, the young Queen of Éire, balances Court politics while pursing the Crown's goals of furthering scientific discovery. When those discoveries lead to the death and madness of those she loves, Áine must choose between her heart and her duty to her kingdom.

A Flight of Numbers Fantastique Strange: Síomón Madóc is desperately trying to discover who is killing the brightest of Éire's mathematicians. The key to saving lives lies in the future...and Síomón must figure out a way to get there.

Ars Memoriae: Éireann spymaster Aidrean Ó Deághaidh goes to the kingdom of Montenegro to investigate rumors of great unrest. But Ó Deághaidh is tormented by visions of a different timeline and suspects that someone in his own government is playing a double game....

The Time Roads: Éire stands on the brink of the modern age, but old troubles still plague the kingdom. An encounter with a mysterious stranger near death holds the clue to both the past and the future of the nation.

BETH BERNOBICH comes from a family of story tellers, artists, and engineers. She juggles her time between working with computer software, writing, family, and karate. Her short stories have appeared publications such as Asimov's, Interzone, Postscripts, Strange Horizons, and Sex in the System. She lives with her husband and son in Bethany, Connecticut.
Loading...
or
Not Currently Available for Direct Purchase