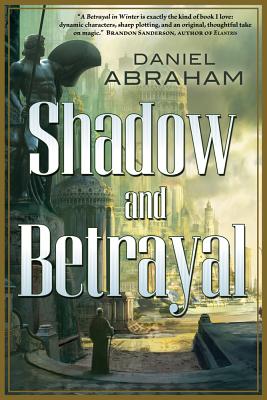 A Shadow in Summer, A Betrayal in Winter (Long Price Quartet)

In this omnibus edition of A Shadow in Summer and A Betrayal in Winter, the aggressively expansionist Galt empire has already conquered lands across a huge continent. But the cities of the Khaiem resist Galt's power with the andat—creatures of magic with godlike powers.

Each andat is brought into being by a "poet" who must say the right words and exert the iron will needed to control gods. The industrialized Galt war machine is helpless against the powers of the andat…but political intrigue and deep treachery combine to shift the balance of power in a world of ancient empires and immortal magics.

One man, Otah Machi, stands at the crossroads of history in these imaginary world fantasies, the fulcrum around which the wheels of epic history rotate through achingly poignant cycles of life and death, love and betrayal.

Shadow and Betrayal marks Daniel Abraham as one of today's most brilliantly original young fantasy writers.


Praise For Shadow and Betrayal: A Shadow in Summer, A Betrayal in Winter (Long Price Quartet)…

“A Betrayal in Winter is exactly the kind of book I love: dynamic characters, sharp plotting, and an original, thoughtful take on magic.” —Brandon Sanderson, bestselling author of The Way of Kings

“Daniel Abraham's spectacular debut [A Shadow in Summer] begins as an intimate story about one man's involvement in an unsavory job but soon expands into a breathtakingly complex conspiracy that could topple empires and kill thousands. In a word: Brilliant!” —Barnesandnoble.com, Editor's Choice: Top Ten Novels of 2006

Daniel Abraham has had stories published in the Vanishing Acts, Bones of the World, and The Dark anthologies, and has also been included in Gardner Dozois's Year's Best Science Fiction anthology.  He won the International Horror Writers Association award for best short fiction for his story “Flat Diane.” His books include The Long Price Quartet, starting with A Shadow in Summer. He lives in New Mexico with his wife and daughter.
Loading...
or support indie stores by buying on