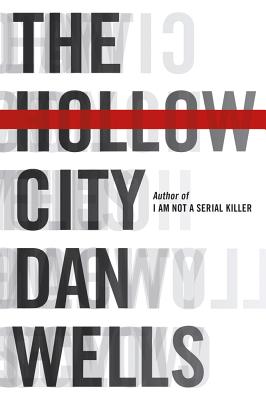 Dan Wells won instant acclaim for his three-novel debut about the adventures of John Wayne Cleaver, a heroic young man who is a potential serial killer. All who read the trilogy were struck by the distinctive and believable voice Wells created for John.

Now he returns with another innovative thriller told in a very different, equally unique voice. A voice that comes to us from the  realm of madness.

Michael Shipman is paranoid schizophrenic; he suffers from hallucinations, delusions, and complex fantasies of persecution and horror. That’s bad enough. But what can he do if some of the monsters he sees turn out to be real?

Who can you trust if you can't even trust yourself? The Hollow City is a mesmerizing journey into madness, where the greatest enemy of all is your own mind.

Dan Wells is the author of I Am Not a Serial Killer, Mr. Monster, and I Don't Want to Kill You. He lives in Orem, Utah, with his wife, Dawn, and four young children.

Praise For The Hollow City…

Praise for I Am Not a Serial Killer:

“This dazzling, unput-downable debut novel proves beyond a doubt that Dan Wells has the gift."
—F. Paul Wilson on I Am Not a Serial Killer


“Fans of Jeff Lindsay’s Dexter series will welcome Wells’s gripping debut.”
—Publishers Weekly on I Am Not a Serial Killer