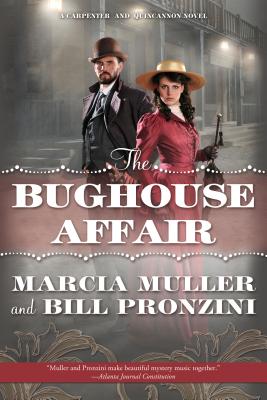 Sabina's case involves the hunt for a ruthless lady "dip" who uses fiendish means to relieve her victims of their valuables at Chutes Amusement Park and other crowded places. Quincannon, meanwhile, is after a slippery housebreaker who targets the homes of wealthy residents, following a trail that leads him from the infamous Barbary Coast to an oyster pirate's lair to a Tenderloin parlor house known as the Fiddle Dee Dee.

The two cases eventually connect in surprising fashion, but not before two murders and assorted other felonies complicate matters even further. And not before the two sleuths are hindered, assisted, and exasperated by the bughouse Sherlock Holmes.
Fans of Marcia's Muller's bestselling Sharon McCone novels and Bill Pronzini's Nameless Detective series will applaud this and future exploits from the annals of Carpenter and Quincannon, Professional Detective Services.


Praise For The Bughouse Affair…

“Marcia Muller and Bill Pronzini have brought together the distinctive personalities and differing investigative styles of their fictional snoops.  The result is a team [Sharon McCone and the Nameless Detective] that is as memorable as Nick and Nora Charles.... When they combine forces, they double our pleasure.”
— San Francisco Chronicle

“Muller and Pronzini are a duo who make beautiful mystery music together.”
—Atlanta Journal Constitution

Marcia Muller is the New York Times bestselling creator of private investigator Sharon McCone. The author of more than thirty-five novels, Muller received the MWA's Grand Master Award in 2005.Bill Pronzini, creator of the Nameless Detective, is a highly praised novelist, short story writer and anthologist. He received the Grand Master Award from the MWA in 2008, making Muller and Pronzini the only living couple to share the award.
or
Not Currently Available for Direct Purchase