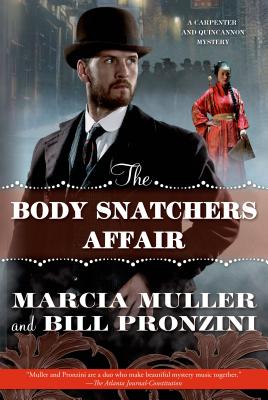 The Body Snatchers Affair: The latest in the Carpenter and Quincannon historical mystery series from Marcia Muller and Bill Pronzini.

Two missing bodies and two separate investigations take Carpenter and Quincannon from the heights above San Francisco Bay to the depths of Chinatown's opium dens.

For John Quincannon, this is a first: searching a Chinatown opium den for his client's husband, missing in the middle of a brewing tong war set to ignite over the stolen corpse of Bing Ah Kee.

Meanwhile, his partner, Sabina Carpenter, unsure of the dark secrets her suitor might be concealing, searches for the corpse of a millionaire, stolen from a sealed family crypt and currently being held for ransom.

With the threat of a tong war hanging over the city (a war perhaps being spurred on by corrupt officials), Carpenter and Quincannon have no time to lose in solving their cases. Is there a connection between the two body snatchers? Or is simple greed the answer to this one?

And why is the enigmatic Englishman who calls himself Sherlock Holmes watching so carefully from the shadows?


Praise For The Body Snatchers Affair: A Carpenter and Quincannon Mystery…

"You can’t go wrong with this one."—The Examiner

Bill Pronzini's novel, Snowbound, received the Grand Prix de la Littérature Policière as the best crime novel published in France in 1988. A Wasteland of Strangers was nominated for best crime novel of 1997 by both the Mystery Writers of America and the International Crime Writers Association; in addition to six Edgar Award nominations, Pronzini has received three Shamus Awards, two for best novel, and the Lifetime Achievement Award. He lives in northern California with his wife, the crime novelist Marcia Muller.
or
Not Currently Available for Direct Purchase