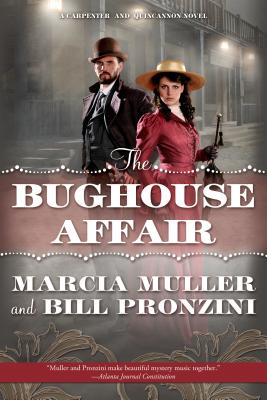 In The Bughouse Affair, the first of a new series of lighthearted historical mysteries set in 1890s San Francisco, former Pinkerton operative Sabina Carpenter and her detective partner, ex-Secret Service agent John Quincannon, undertake what initially appear to be two unrelated investigations. Sabina's case involves the hunt for a ruthless lady "dip" who uses fiendish means to relieve her victims of their valuables at Chutes Amusement Park and other crowded places.

Quincannon, meanwhile, is after a slippery housebreaker who targets the homes of wealthy residents, following a trail that leads him from the infamous Barbary Coast to an oyster pirate's lair to a Tenderloin parlor house known as the Fiddle Dee Dee. The two cases eventually connect in surprising fashion, but not before two murders and assorted other felonies complicate matters even further. And not before the two sleuths are hindered, assisted, and exasperated by the bughouse Sherlock Holmes.

Fans of Marcia's Muller's bestselling Sharon McCone novels and Bill Pronzini's Nameless Detective series will applaud this and future exploits from the annals of Carpenter and Quincannon, Professional Detective Services.


Praise For The Bughouse Affair: A Carpenter and Quincannon Mystery…

“Marcia Muller and Bill Pronzini have brought together the distinctive personalities and differing investigative styles of their fictional snoops. The result is a team [Sharon McCone and the Nameless Detective] that is as memorable as Nick and Nora Charles.... When they combine forces, they double our pleasure.” —San Francisco Chronicle on Double

“Muller and Pronzini are a duo who make beautiful mystery music together.” —Atlanta Journal Constitution on Double

Bill Pronzini's novel, Snowbound, received the Grand Prix de la Littérature Policière as the best crime novel published in France in 1988. A Wasteland of Strangers was nominated for best crime novel of 1997 by both the Mystery Writers of America and the International Crime Writers Association; in addition to six Edgar Award nominations, Pronzini has received three Shamus Awards, two for best novel, and the Lifetime Achievement Award. He lives in northern California with his wife, the crime novelist Marcia Muller.
or support indie stores by buying on
(This book is on backorder)