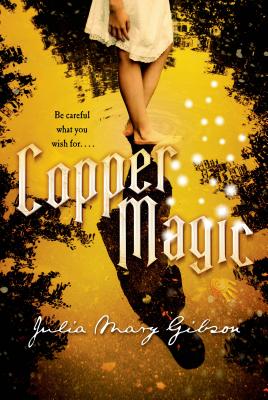 The year is 1906, and on the shores of Lake Michigan twelve-year-old Violet Blake unearths an ancient talisman—a copper hand. Violet's touch warms the copper hand and it begins to reveal glimpses of another time. Violet is certain that the copper hand is magic—and if anyone is in need of its powers, it's Violet. Her mother and adored baby brother are gone, perhaps never to return. Her heartbroken father can't seem to sustain the failing farm on the outskirts of Pigeon Harbor, on the shores of Lake Michigan.

Surely the magic of the copper hand can make things right for Violet and restore her fractured family. Violet makes a wish. But her ignorant carelessness unleashes formidable powers—and her attempts to control them jeopardizes not only herself, but the entire town of Pigeon Harbor.

In Copper Magic, land and waters are alive with memories, intentions, and impulses. Magic alters Violet and brings her gifts—but not always the kind she thinks she needs. First-time author Julia Mary Gibson brings Violet and her community to life in this impressive and assured debut.

“A book whose timeless magic makes me want to protect it as loyally and fiercely as Violet protects the copper hand…. Julia Mary Gibson's quiet masterpiece is an effortless alloy of magic and science.” —Elizabeth Wein, New York Times bestselling author of Code Name Verity

“An impressive debut that's both historical fiction and enchanted realism.… Gibson examines race, ethnicity, class and tragedy without didacticism or oversimplification, and while all of the characters are well-crafted, the imperfect protagonist is particularly refreshing. Furthermore, Violet's poor choices have real-world consequences, and those negatively affected are not blissfully forgiving but instead help Violet feel the depth of her transgressions. Fresh, subtle, daring: well done indeed.” —Kirkus Reviews (starred review)

JULIA MARY GIBSON was born the child of radical activist poets in the time of the Freedom Rides and the Vietnam War. She grew up to be a communard, welfare mother, waitress, secretary, visual effects producer, and mentor to unwed teens. She lives in sight of the Hollywood sign in California. Copper Magic is her first novel.
Loading...
or
Not Currently Available for Direct Purchase